The Copa América, the main international competition for South America, is upon us and it will be host to a display of great soccer, heated rivalries and, in the end, it will crown a new South American champion. 32 Flags will preview the groups of the Copa América and will preview whom to keep an eye on and give predictions on what teams are expected to advance out of their respective groups.

Thoughts: This is an interesting group as there are no teams in the top 10, as there are two each of the other groups, and it looks like it could be the most competitive from the three. Mexico is coming in with a mix of their A and B squad, with some players having less than five games experience with the national squad and others (Rafa Marquez) having 124 caps for the main squad. It will be interesting to see if Mexico can finish in the top two with such a young squad, but all eyes will fall on the hosts and their leading superstar Alexis Sánchez.

Sánchez will be called upon to make a difference and come up big in the goal department for his team, much like he did when playing for club team Arsenal. He will have some help in front with Arturo Vidal feeding him from the midfield position, and Chile will have options in the forward position besides Sánchez that will help on the offensive side of the ball, such as Eduardo Vargas (who plays for Italian side Napoli).

Predictions: Chile and Mexico will advance, Ecuador in third (will advance to knockout stages) Chile has the squad to finish in first and I have them winning the group, as the home crowd will try and will on La Roja to victory. The second automatic spot will prove tricky as Mexico and Ecuador will, in my opinion, be the ones to battle it out for second as Bolivia is the weak link in this group. The winner of the Mexico/Ecuador matchup will be the one to advance and I believe it will be Mexico, by a slim margin winning over Ecuador. But fret not Ecuador, as I think that they have the possibility of still advancing to the knockout stages as one of the top two third-place teams.

Thoughts: This group features a appetizing matchup between neighbors Uruguay and Argentina (I have this in my book as the game to watch out of all the groups). We all know the stars that Argentina touts such as Messi, Mascherano, Tevez, Higuaín, and the list goes on. Point being we expect Argentina to compete and possibly win the group with such a star studded team. 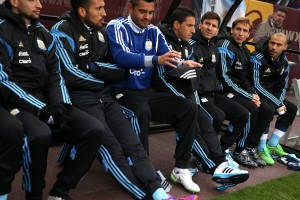 LANDOVER, MD – MARCH 28: Lionel Messi #10 of Argentina looks on before playing El Salvador during an International Friendly at FedExField on March 28, 2015 in Landover, Maryland. (Photo by Patrick Smith/Getty Images)

Uruguay is the other team to keep an eye on however, Uruguay will be without the services of star forward Luis Suarez, as he is serving his suspension from FIFA for his biting incident against Italian defender Giorgio Chiellini in last year’s World Cup. But, forward Edinson Cavani will be a more than sufficient substitute for the banned Suarez, scoring 25 goals for the Uruguayan team in his career.

Predictions: (Argentina and Uruguay advance, Paraguay will finish third (will not advance to knockout stages) Argentina and Uruguay seem like the heavy favorites with the strength of their teams overshadowing their smaller group mates in Paraguay and Jamaica. However, I do see Paraguay banding together to give the Argentines and Uruguayans a fight, trying to capture the same magic that made them darlings in the 2010 World Cup. But, Paraguay will be lucky to finish in the number three spot and I would be very surprised to see them in the knockout stages, should they finish third.

Thoughts: Another group where there are two considerable favorites and two underdogs that are vying to advance to the knockout stages as one of the two third-place finishers. Brazil will try and shake off the embarrassment of finishing fourth in the World Cup that was held in their own country by trying to win this tournament. Relying on former Santos teammates, Neymar and Robinho, to spearhead their attack, Brazil looks like a side that will go far in the tournament.

Colombia will try and win their first Copa América since they won it in as hosts in 2001. With a lineup that includes James Rodríguez, speedy Porto forward Jackson Martínez, and Radamel Falcao, los Cafeteros will be another offensive powerhouse that other defenses in their groups will have to build strategies against.

Peru is the team I have as the other third-place team that will advance to the next round. Look for veteran forwards Claudio Pizarro and Jefferson Farfán to push the Peruvian squad on the offensive side of the ball; meanwhile the young Peru defense will shine in big moments to aid their squad as they fight to advance in the competition.