Dunga has assembled a great Brazilian squad, but as great as they are they will be without their superstar captain Neymar. This being because Neymar wanted to play both the Copa America and the upcoming Olympics in Rio de Janeiro and the Brazilian FA had to ask Barcelona for his release. Barca, played it safe being fearful of an injury before La Liga starts and is only allowing Neymar to play in one competition, of which he chose the Olympics over Copa America.

Although Brazil has a strong forward corps in Hulk, Gabriel Barbosa and Jonas, we all have seen what happens when Neymar doesn’t suit up for Os Canarinhos. Granted, no one in Brazil’s group can compare to the current World Cup champions, but the fact remains that Neymar packs an explosive punch that Brazil would benefit from.

Aside from Neymar opting out of the Copa, Brazil faces an epidemic in that they cannot seem to stay healthy. Dunga had first chosen Ricardo Oliveira and Douglas Costa, both of who are in great form right now, to represent Brazil. Oliveira, being the ageless wonder he is, was a shock call up for Brazil as he is tearing it up with his club team, Santos, but a knee injury suffered in the Paulista state championships forced him out. Jonas then came in to replace the injured Oliveira on May 20. 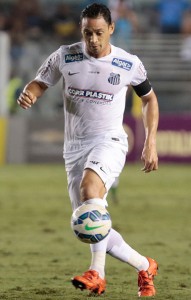 SANTOS, BRAZIL – NOVEMBER 19: Ricardo Oliveira of Santos runs with the ball during a match between Santos v Flamengo of Brasileirao Series A 2015 at Vila Belmiro Stadium on November 19, 2015 in Santos, Sao Paulo, Brazil. (Photo by Miguel Schincariol/Getty Images)

Then, a big blow for Brazil’s midfield as Bayern Munich’s Douglas Costa, who has really come into his own this past season, came down with a left thigh injury that saw him scratched by the CBF and replaced by Orlando City SC’s Kaká on May 26. This was not a popular move in the fan’s eyes as they protested that Kaká doesn’t play in a good enough league and the fact that he is getting on in age was a big contention point. Unfortunately, Kaká also came down with a hamstring injury during training that has ruled him out of the Copa as well, and the CBF has replaced him with São Paulo’s Paulo Henrique Ganso on June 1.

Brazil’s injury list doesn’t stop there. Rafinha (hamstring) and Ederson (inflammation of the pubic bone) were ruled out because of their respective injuries. They were replaced by Lucas Moura from PSG and Marcelo Grohe of Grêmio on May 31. And if that wasn’t bad enough, Wolfsburg’s Luiz Gustavo withdrew from the squad on June 2 due to personal reasons and a statement by the CBF stated that, “Luiz Gustavo had already reported the existence of the problem to the technical committee in Brazil.” Gustavo was replaced by uncapped Grêmio defensive midfielder Walace.

So in the span of two weeks the Brazilians lost a forward, three midfielders, a defensive midfielder and a goalkeeper. Talk about rough. But in all seriousness, this really has to mess with the chemistry, formation and tactics that the team has tried to develop in preparation for the Copa America Centenario. Losing a player ever third day really has to take a toll not only on the players mentally, but also on Dunga’s psyche as he probably has had to switch up his game plan on how to place his players going into his first game in Pasadena against Ecuador.

Even though Brazil faces a relatively tame group with Ecuador, Haiti and Peru the constant disarray the team has been in lately could spell trouble for them early on. If they don’t develop a rhythm with each other soon, they could be out before the knockout stages. And even if they do move on into the knockout stages, tougher challenges will test a Brazilian squad that hasn’t had much experience (with 16 players having 15 or less caps for Brazil, and 15 of those players have less than 10 caps).

So Brazil better get ready for a tough Copa America, as there is no Neymar, or Kaká, or Douglas Costa or Rafinha to help them out in this tournament.