Liverpool have been woeful for the last few weeks. I don’t think that is even a remotely controversial opinion to have. Saturday was different, though. Liverpool’s demolition of Spurs showed that they are still capable of the exciting soccer that we had come to expect. Many have begun attributing this to Liverpool raising their game to the opposition, but that is  only half the truth. While the entire team played well, there is a more central reason for this. Literally.

The midfield trio that Jurgen Klopp started for the match against Tottenham was the one that started for most of the early season. The midfield of Jordan Henderson, Adam Lallana and Georginio Wijnaldum was undeniably first choice. When Philippe Coutinho’s injury changed this, causing Klopp to shuffle Lallana into the attacking three. This broke the burgeoning partnership between the three. An untimely injury to Henderson exacerbated this issue during the packed holiday run of games. Why does this midfield trio have so much influence on the game? 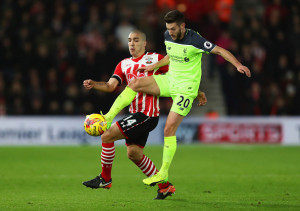 Between the three of them, we have seen the development of an unusual balance. This isn’t to say that they don’t have specific roles in the midfield. They do. What we do see, though, is that all three players are capable of playing all three of the roles, to a degree. They can all attack, defend, or link up play. This versatility creates a fluid midfield that is able to fulfill any role that is needed from them. Pressing, attacking, or defending: none of these phases of a game are completely outside of their wheelhouse. This versatility is backed up further by a work rate that is the envy of teams throughout the league. All three players can and will put in a shift for you.

For an example of this hard working versatility, all you need to do is look at their most recent game against Tottenham.  Tottenham boast a midfield duo of Moussa Dembele and Victor Wanyama, two of the most physically imperious midfielders in the league. For 77 minutes (when Dembele was subbed out), they were bullied by the three smaller, but determined midfielders. 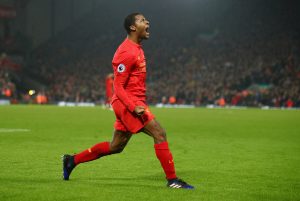 LIVERPOOL, ENGLAND – JANUARY 31: Georginio Wijnaldum of Liverpool celebrates scoring his side’s first goal to make it 1-1 during the Premier League match between Liverpool and Chelsea at Anfield on January 31, 2017 in Liverpool, England. (Photo by Clive Mason/Getty Images)

This is all well and good, but without the speed of play Liverpool displayed against Tottenham, they would be in the exact same position they were in January. This was the big difference between September/October 2016 Liverpool and January 2017 Liverpool. Not only did they lose foot speed in Sadio Mane, they lost the game speed that is so important to Klopp’s gengenpress. Not only is it important for players to be physically quick, they have to be able to think fast.

This is a skill shared by Henderson, Lallana and Wijnaldum. As soon as they receive the ball, their heads up are and they are looking for the next option. Very rarely do they hold the ball too long. Even rarer are instances that they caught out by the opposition for holding it too long. This intelligent, quick recycling of the ball and movement around the pitch is what caught Tottenham out on several occasions and kept the ball in Liverpool’s possession. 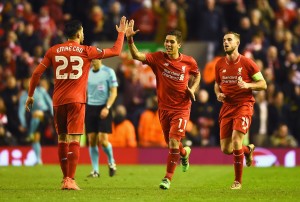 LIVERPOOL, ENGLAND – MARCH 10: Roberto Firmino of Liverpool (11) celebrates with Emre Can (23) as he scores their second goal during the UEFA Europa League Round of 16 first leg match between Liverpool and Manchester United at Anfield on March 10, 2016 in Liverpool, United Kingdom. (Photo by Laurence Griffiths/Getty Images)

This combination of quick intelligent play and tactical balance makes for a deadly combination. What does it mean for the first choice backup, Emre Can? Let’s get one thing out of the way quickly. Emre Can is a good player. He is physically strong, he can pick out a pass, and can influence the game when called upon. So why does he find himself the odd man out now? Simply put, he lacks the two key traits of the other three. He doesn’t have the tactical flexibility to play an attacking, defensive, or central midfielder.

Most damning of all, though, is his play speed. A small lack of foot speed is okay. Where he fails is how slow on the ball he is. This is a fatal flaw in the way he plays. Far too often, Can holds the ball far too long. Even then, he has a bad habit of making the wrong choice or being in the wrong place at the wrong time. Can is still pretty young for a midfielder and has time to develop these skills, but he needs start ASAP.

Liverpool are an undeniably good team, frighteningly so on their day. What we have learned this season, though, is that there is a certain formula to “their day.” Specifically, the tactical combination of Henderson, Lallana and Wijnaldum are critical to Liverpool’s form. With so much riding on these three and little suitable backup, it certainly seems like a potential achilles heel. Come the summer, however, we have a clear picture of what a Liverpool midfielder is, and we can expect backup to be brought in.