With another disheartening draw on his hands, Brendan Rodgers finds himself in an unenviable position. With only 8 points out of a possible 18, many fans are hopping on the #RodgersOut bandwagon. This was always going to be a case to some degree with Jurgen Klopp still very available, but the form and style of play haven’t helped Rodger’s case. So the question that stands before FSG, Liverpool’s owners, and the fanbase is does Rodgers deserve the sack? 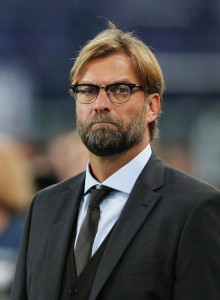 While it would be easy to say yes and move on (8 out of 18 and winless in the last five matches), sacking Rodgers immediately might not be the best idea. Whatever direction FSG decide to go, waiting until the October international break is probably the best time to make up their minds. This gives Rodgers plenty of time to turn around the team that he has spent so much to build, but would also give a new manager enough time to settle in before his first game. Keeping this in mind, I doubt we will see Liverpool make a move one way or the other until then. That being said, this could all change should there be another game similar to the West Ham away match.

It may be difficult to see the reasoning, but at the time, keeping Rodgers seemed like a good idea this summer. This is a manager who had masterminded one of the most exciting title races in Premier League history. He had his team playing fearless, almost insane soccer with a never-say-die attitude. It is ludicrous that some say this was all down to Luis Suarez. Unfortunately, the same manager that lead the team through that campaign was incredibly shaken by it’s ending. One can look at last season, and this season to a lesser extent, as a response to how that title race ended. The search for a more defensively stable formation culminated in last season’s fairly successful 3-5-2, but that was ultimately found out.

It would appear that Rodgers has thrown the baby out with the bathwater in this. Instead of keeping the mad attacking diamond formation and tweaking it to cut out some of the glaring defensive errors, Rodgers has changed the formation and the style to cover up those weaknesses. This has, unfortunately failed. Liverpool looked as suspect at the back as they did in 2013/14 but without the goal-scoring. It is this self-doubt and internal conflict that has led Liverpool to play without a clear identity. Rodgers avoids the diamond with an almost pathological fear but isn’t the type of manager to go full-on park-the-bus. This leaves Liverpool in a limbo that leads to the current soccer tragedy we see before us. The hope with keeping Rodgers at Liverpool is that he can work his way out of this funk and regain that swashbuckling swagger. 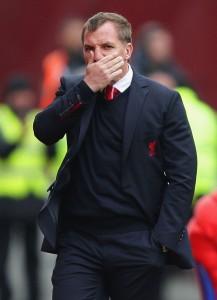 STOKE ON TRENT, ENGLAND – MAY 24: Brendan Rodgers manager of Liverpool reacts during the Barclays Premier League match between Stoke City and Liverpool at Britannia Stadium on May 24, 2015 in Stoke on Trent, England. (Photo by Dave Thompson/Getty Images)

The concern is that the longer this poor streak continues, the less likely it appears that Rodgers will be able to turn this around. The team appears listless on the pitch, lacking a genuine hunger at the worst times. In what is probably the greatest irony of his career, for all of Rodgers talk of character, his team lacks it at crucial times. So this leaves us with a huge question. Can Rodgers get his mojo back?

A large portion of the Liverpool fanbase seems to believe the answer is no. #RodgersOut is a prevalent hashtag and a certain Twitter account about how delusional Rodgers is has become quite popular. I will not be linking to that account, however, as it is sponsored by the Sun. I won’t be bothering with that trash.

You know you are in a bad spot when even your fans, the few who still support you, are becoming increasingly quiet. Instead, it appears the way to support Rodgers is more and more becoming simply not calling for his head.

So the question remains. Should he stay or should he go? Why else would you have read this article? Well, now is not the time to sit on the fence. As pointed out above, FSG are unlikely to fire Rodgers before the October international break. That gives him a total of four matches (Home against Carlisle United, Home against Aston Villa, Home against Sion, and Home against Everton) to turn it around. All four of those should be wins. If Rodgers is only able to win three out of the four, allowing for one draw, he should be sacked the day after the Everton game. I’m sorry, Rodgers. I’m a big supporter of yours, and I doubt we’ll ever see a season quite like 2013/14. Unfortunately, the times up. You can’t keep selling this as a rebuilding process. You can’t keep saying it’s down injuries. These are your players, brought in by you. It’s time to stop talking about character and get yours back. I sincerely hope you do.