32 Flags is previewing the group stages of the Gold Cup and today we focus on Group C that has upward bound Trinidad & Tobago and see if Mexico can recover from this recent run of bad form and make it into the knockout rounds of the Gold Cup. Will guppies Cuba and Guatemala be able to take advantage of a Mexico that is against the ropes? Will Mexico advance into the next round? Let us examine Group C. (Editors Note: This was written before last night’s games and the only things edited were where everyone is in FIFA’s Rankings)

Oribe Peralta is the man that Mexico has called upon to replace Chicharito, after he picked up his collarbone injury, and he is more than a suitable replacement for Hernández. He has consistently tore it up for Mexican club sides Club América and Santos Laguna, where he has scored 109 goals since 2006. Along with his accomplishments at the club level, he has also scored 26 goals for both the Olympic and senior national team. If someone can be the game changer for Mexico, it can be Oribe Peralta. 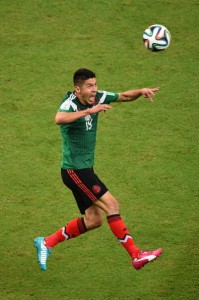 RECIFE, BRAZIL – JUNE 23: Oribe Peralta of Mexico heads the ball during the 2014 FIFA World Cup Brazil Group A match between Croatia and Mexico at Arena Pernambuco on June 23, 2014 in Recife, Brazil. (Photo by Laurence Griffiths/Getty Images)

Despite his age, Peralta is the third-oldest member of El Tri at 31 years old, Peralta has a nose for goal and is still nimble enough to maneuver past defenders and find space. The Mexican midfielders will be looking for him as he makes his run towards the net and will be a headache for the defenses of Guatemala and Cuba, who will most likely develop their game plans to stop “El Hermoso” (Spanish for “The Beautiful One”).

X-Factor in Group C: Mexico’s State of Mind Coming Into The Tournament

Mexico’s recent nightmarish spiral into chaos has only gotten worse and it couldn’t have come at a more inappropriate time for El Tri, as the Gold Cup is nigh. Miguel “El Piojo” Herrera has lost the plot recently with the whole Twitter scandal involving his daughter and many supporters calling for his ouster after his constant complaining that Mexico gets shafted by the refs instead of addressing the bigger issue that Mexico is not playing their best football right now. Mexico has played seven games without winning a single one, crashing out of the Copa América and managing draws against fellow CONCACAF squads such as Honduras and Costa Rica. To make matters worse their leading scorer Javier “Chicharito” Hernández and a key cog of their defense, Hector Moreno, have recently picked up some injuries and have been ruled out of the Gold Cup.

With El Piojo seeming to lose control of the Mexican squad, it begs the question of how ready, mentally, they will be going into the Gold Cup. Usually when Mexico enters the Gold Cup, they are among the favorites to win the competition, but this year they look like anything but. It will be up to Herrera to lead the Mexico squad through choppy waters, and hopefully right this sinking ship and focus on advancing into the knockout stages.

In my view, the last game of the group play will be the determining match of the two powerhouses in the group. Trinidad and Mexico have to make their mark in this game going forward, that is if they make it to the next round. Both squads know that they are each other’s best opposition they will be facing in the group stage and will try to steal away three points from one another as those points will prove precious in deciding what positions they will sit in after the conclusion of the group stage.

Teams To Automatically Move On: Mexico and Trinidad & Tobago

This group is really hard to predict because either: 1) Teams (Mexico and T&T) have been god-awful as of late or 2) Teams (Guatemala and Cuba) are ranked so low in the FIFA Rankings that you just have no hope for them at all. All in all, Mexico should, barring any catastrophies, be able to make it out of Group C and into the knockout round and the second team out of this group will be the Soca Warriors, aka Trinidad and Tobago. I really do not see Guatemala nor Cuba making enough of an impact to finish in the top two spots. However, with Mexico being as poor as they have been recently it wouldn’t surprise me if they didn’t finish in the top two and this could be an opportunity for Los Chapines or Los Leones del Caribe to shake up the CONCACAF soccer world.