Australia pulled off the upset of all upsets as they managed an 80th minute goal in a scoreless game to overcome the heavily favored Brazil to advance to the quarter-finals of the 2015 Women’s World Cup.

The Matildas shocked the whole world as they beat a team that has Formiga, a 37 year-old playing in her 6th World Cup, and the five-time FIFA Women’s Player of the Year in Marta. Australia played a great defensive and counter attack game and, not surprisingly, through a counter attack is where their goal was scored.

Even Brazil manager Vadão admitted, “It came down to a simple little thing: losing the ball in midfield. We had controlled the match, especially in the second half. But we weren’t capable of finding an equalizer after conceding the goal.”

With Australia winning, they demonstrated that women’s football is expanding and developing beyond the traditional powers. Teams like Colombia, Australia, Cameroon, and the Netherlands have surprised many by making their way into the knockout rounds and even in the group stages many teams that experts thought were not going to be competitive, were very much so against established women’s powers such as the United States, France, and Brazil.

Along with the loss of dominance of those said powers, better funding and more appreciation of the women’s game all over the world has led to better international competition all around, this also marks the end of an era in Brazil. 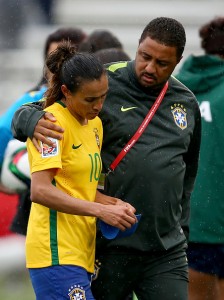 during the FIFA Women’s World Cup 2015 round of 16 match between Brazil and Australia at Moncton Stadium on June 21, 2015 in Moncton, Canada.

Players like Formiga and Rosana (aged 37 and 32 respectively) have, most likely, played their last ever World Cup games and Marta will be 33 when the next World Cup starts so we will have to wait and see if she will call it quits before then. That nucleus that made Brazil so deadly in attack will most likely not be in the next edition of the Women’s World Cup and who knows who will fill in those spots.

Brazil has long relied on Formiga, Rosana, Marta, and Cristiane (aged 30) for their attacking needs and now that they are reaching an age where they will no longer be able to handle the rigorous regimen that is necessary for the preparation for a World Cup. As for who is the new face of Brazil, Andressa Alves and Raquel Fernandes have shown glimmers of promise, scoring a goal each in this Women’s World Cup.

Not to mention that Brazil has never won the Women’s World Cup, have failed to advance past the first round of the knockout stages in consecutive World Cups, and the fact that most experts said that this was Brazil’s best squad in years does not help justify their early exit from the competition.

With this said, we also have to admire the way that Australia played and the way that most “small” teams have played against the world powers of women’s soccer. Only nine members of Austrailia’s current squad is over the age of 25 so they can only learn from this experience and get better, promising that their future in women’s soccer is bright. As for the ongoing World Cup, the Matildas are striving toward bigger goals ahead.

“Obviously it is a big moment, I don’t think it is the biggest moment yet though. I think we still have to keep going before it is the biggest moment ever,” said Australia’s manager, Alen Stajcic. He continued, “We are all super-proud, so excited, I think exhilarating is the word for a victory against a big, powerful football nation but there is still more to come.”