After Mexico sacked their manager Miguel “El Piojo” Herrera, they now face a daunting task in searching for his replacement.

Amidst all the controversy he stirred up, many fans questioned his media presence in being in a lot of commercials in Mexico and not focusing on the national team, and the fight that led up to his confrontation with journalist Christian Martinolli.

However, we have to remember that he led Mexico in their time of need, led Mexico to a respectable showing in the 2014 World Cup before being ousted by a questionable penalty and, most recently, won the 2015 Gold Cup.

Now with Herrera gone the question is: Who will be his replacement? To this question, I have a list of five candidates that can replace El Piojo.

Certainly one of the sexier choices for the Mexico job would be current Olympique de Marseille manager Marcelo “El Loco” Bielsa. An experienced manager on both the club and international level, he has coached Argentina for eight years and led Chile on their impressive 2010 World Cup showing. He also has experience coaching in Mexico as he coached Atlas and América from 1992-1996.

However, coaching in Marseille is not the same as coaching the Mexican side. The pressure of the Mexican people clamoring for a successful coach has shied away many candidates that are rumored to be in the running for this post. Also, his signature 3-3-3-1 formation is not what the Mexico squad is used to playing with, as El Tri, usually plays with four defenders in the backline and I really do not see Mexico as a team to press and recover the ball when not in possession.

“El Turco”, as he is affectionately known, is one of the most popular managers in Mexico having led Tijuana and América to league titles in time in the Liga MX. Mohamed currently manages Monterrey in the Liga MX, and has managed many more teams in the Mexican and Argentine leagues. 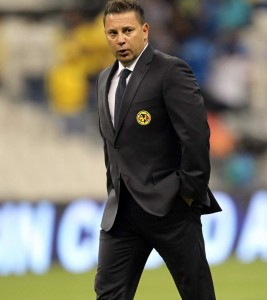 Antonio “El Turco” Mohamed when he was manager of América.

The only drawback of the Argentine is that he has no experience managing on the international level, having only managed club teams in his 12 years as a manager. But, he knows the Mexican system and (in my opinion) would be the best bet to succeed Herrera as the Mexico skipper.

“El Tuca” Ferreti is always a favorite when the Mexico coaching vacancy is open and he should be. The Brazilian has spent more than half of his life in Mexico, first as a player and then debuting in 1991 as a coach for Pumas UNAM. Since then, he has coached many Mexican league sides and winning the championship with Chivas in 1997, Pumas in 2009, and Tigres in 2011. He has become one of the most accomplished coaches in Mexican history, so you would think he would be a great fit for La Seleccion.

You would be wrong as Ferreti, always the talkative one, said in 2008,

I’ve said it years before, the only position I have no interest in is to be the Mexican national manager, if they offered me a job as a street sweeper, maybe I’d be interested, but to be the Mexican manager doesn’t interest me, I was candidate four times now and I still wont go, even if I was the last manager in the world, I won’t go.”

Well, so much for that.

Matosas, a well-versed manager on the club level in his native Uruguay and in Mexico, is also one that is familiar with the Mexican system. He led León to consecutive league titles in the Apertura 2013 and Clausura 2014, an accomplishment not seen in Mexico for a long time.

After his success at León, Matosas was made manager of Club América and won the 2014-15 CONCACAF Champions League championship against MLS side Montreal Impact. Being fired after one Clausura season with las Águilas, Matosas now is manager of Atlas.

Being one of the more successful managers in the Liga MX, Matosas seems like a great fit to be the next manager. However, he has stated recently that he “finds it difficult that Mexico will chose him as the next manager.” 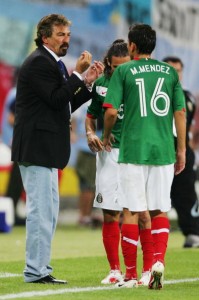 LEIPZIG, GERMANY – JUNE 24: Manager of Mexico Ricardo La Volpe gives instructions to Jose Antonio Castro and Mario Mendez during the FIFA World Cup Germany 2006 Round of 16 match between Argentina and Mexico played at the Zentralstadion on June 24, 2006 in Leipzig, Germany. (Photo by Alex Livesey/Getty Images)

La Volpe, to me, seems like the most likely candidate that Mexico will chose to be the next skipper. He has experience managing Mexico, as he was coached them from 2002-2006 which included leading Mexico to a round-of-16 finish in the 2006 World Cup. He also managed the Costa Rican national team from 2010-2011, adding to his international experience.

Even with all his experience, he comes with some controversy that might turn off the Mexican FA from hiring him. In 2014 while coaching Chivas, La Volpe was accused by a female staff member of improper behavior on her and the owner of Chivas announced that there was a lawsuit against La Volpe for his involvement in that matter. So will Mexico take a risk on him?