This is the first in what will be a multi-part series on the Guam Football Association. This team has quickly gone from challenged football organization to legitimate challenger in the Asian Football Confederation. Boasting a new coach, new facilities, a new outlook, and newly recruited Guamanian players from MLS, Guam is the new team to watch in the international scene.

Over the weekend, I spoke on the phone with Gary White, the head coach of the Guam National Football Team. For the unfamiliar, Guam’s national team–nicknamed the Matao–has had a bit of a renaissance since Coach White’s arrival on the small island country three years ago. We spoke about the future of the Matao, White’s strategies, the growth of the Guamanian game, and their immense match against India coming up today.

For a bit of background on Guam, it is a small island nation and American territory of about 200,000 people in the Pacific Ocean. The national soccer team was founded in 1975 and joined FIFA in 1996, but Guam didn’t have much soccer success until recently. Ten years ago, Guam regularly lost by immense margins; today, Guam is coming off their the nation’s first ever victory in World Cup Qualifying, defeating Turkmenistan 1-0. Since Coach White’s arrival a few years ago, Guam has quickly seen their stock rise in international football.

The Guam men’s team is not a team of unknowns if you follow Major League Soccer. AJ DeLaGarza of the Los Angeles Galaxy leads the defense, and Brandon McDonald (unattached, most recently with Real Salt Lake) was called into the side just in the past few months. Winger Ryan Guy (unattached, formerly with New England Revolution), forward Jason Cunliffe (Rovers FC, formerly with Houston Dynamo), and goalkeeper Doug Herrick (unattached, formerly with Sounders U-23 squad) round out a squad with a high amount of professional experience. 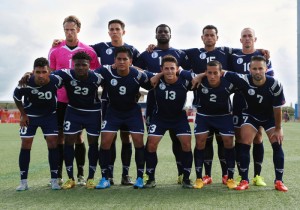 Josh Howard (JH): What was it like being the head coach of Guam’s first ever World Cup Qualifier victory against Turkmenistan on the June 11th?

Gary White: It was an honor, to be honest. It was such a big event for the country and for Guam’s football development. This was a great event to be the coach for, because I know the work that’s gone in prior to me coming into the federation. All the structural development, the new facilities, it’s just the culmination of everything. I feel very honored to be the person to have won the game with the team.

JH: Tell me a little bit about what’s going on with Guam football in terms of the new developments and facilities you mentioned.

Gary White: The facilities here are world class. We’ve got a national training center, with the assistance of FIFA, that allows us to train at one site the national team and all the youth clubs. We have two artificial fields, a mini-artificial field, futsal courts, beach soccer courts, classrooms, offices, everything that you really need to run a program. This is our home base, the home of our football. It makes all the difference, gives us an identity, gives us a place to train, and it’s really top notch in terms of our structure. The senior games are played here, and so are the youth games. We have close to 7,000 registered players who all use it as their home base, not to mention the men’s and women’s national teams. It’s really an all-encompassing soccer home for us.

JH: Changing gears a bit, tell me how you serve as coach—and perhaps a little bit as a recruiter—to bring over players like Brandon McDonald, AJ DeLaGarza, and others from stateside over to Guam?

Gary White: Well, my last job I worked was as the Technical Director for Seattle Sounders FC and the state of Washington. Part of my job was to help our best young and academy players either break into the first team or get college opportunities. I made a lot of good contacts while I was there. I also worked on US Soccer’s national coaching staff on their Player Development Task Force, so I was very connected to the US game. 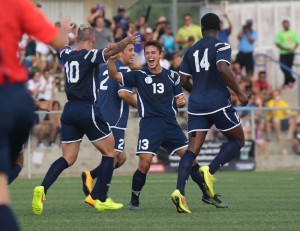 When I got the job in Guam, I immediately tapped into my contacts. I went looking for every single possibly-eligible player. They just weren’t interested in us because of Guam’s past record, so I had to sell the vision that [Guam FA President] Richard Lai and I put together. The first way of doing that was to get one player who is a notable player in the US that I could then use to get other players. It all started off with Ryan Guy, who was with New England Revolution at the time. Ryan was the first one I knew I had to get because if I could get Ryan, then I could try to get the rest. I used Ryan’s name when I was speaking to AJ [DeLaGarza], and once I got those two I could get Brandon [McDonald], and then get others. It allowed me to really sell the program because they could see we were being serious. The next thing was we had to show evidence of it. We can’t just talk, because talk is cheap. Once I got Ryan in to agree to play in a friendly, we had to ensure the players were as professional as possible so that Ryan would want to come back. That’s what we’ve continued to do.

We’re constantly looking at players. You’ve got to understand the Guam population itself is less than 200,000, and there’s more Guamanians living in the US than there is in Guam. There’s also such a background here with the US military. Right now, we have close to 30,000 military personnel here. Some of these people are having babies and leaving, and they’ll never even know that they could play for us.

JH: Do you see many parallels with the recruitment you’re doing in Guam with what Jurgen Klinsmann has done with the German-Americans and others playing for the US team?

Gary White: I think this is mirrored not just with Klinsmann, but every national team coach. Every coach is trying to find the best players. My question to my staff was “Have we seen every single possible player?” And we still haven’t. There’s a couple of other players, very high level players, who have just popped up on the radar I’ll be chasing down for future involvement. There’s more of them out there, and I hope the wins we’re getting will attract more people towards us.

JH: What’s the locker room chemistry like with this combination of players from the Guamanian league and players from MLS?

Gary White: Well, they’re all connected to Guam, and there’s something within the Guam people that’s very family oriented. When they come in, they easily bond. It’s just the Guamanian way. The team’s very welcoming with no ego. AJ—who’s one of the better defenders in the league and has been for a few years—has absolutely no ego. When we look at recruiting players, we are just looking at players who are good enough to play on the field and will merge into our structure. We take the mental connection into account along with the technical and tactical. The fact that AJ was really close to the USMNT for the World Cup—and is probably still on that level where he could be called into the USMNT—the fact that he chose us really shows the type of person he is and the type of program that we’re trying to build. 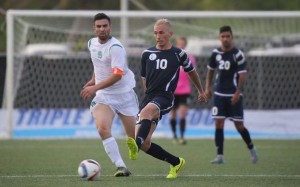 JH: So in terms of the upcoming game against India, other than some MLS stars our readers may be familiar with, who are players on this team that American audience should keep on eye on?

Gary White: Jason Cunliffe, our captain and top goalscorer. He leads by example and he represents everything that Matao is all about. He’s a warrior, a leader, and definitely a massively important part of what we’re doing.

JH: Tell me about your strategy and approach to the India game tomorrow, and how will you build on the momentum from the Turkmenistan victory?

Gary White: We’re going in it to win it. We’re the home team with three points in the bag. India lost their first game, so they’re looking for and needing the win. We’re looking to get another winner out of it and to be top of the group heading into the Iran game in September. There’s a lot on the line, and it should be a fantastic game to be honest. Our philosophy is to go out, play to our strengths, and focus on what we’re good at. Everyone understands their role, responsibilities, knows their job and does their job. We spent the last few days looking at the tactical and strategic side of the game, and we have a plan in place. We hope it will see us through.

Ten years ago, Guam regularly lost games by double digits. In 2015 and beyond, Guam has a legitimate chance to advance to the final rounds of World Cup Qualifying for the Asian Football Confederation. Guam currently sites in a tie for first place in a group that includes Iran, Oman, India, and Turkmenistan.

Guam hosts India in their second match of the group stages. Kickof is at 4:15pm local time and 2:15am EST. We will post a link here to the official game stream once its active.

EDIT: Link to the official steam for Guam v. India