Why that quote? Well, that’s because on Tuesday BBC Sport revealed what was long speculated to be the case — current UEFA president and former Juventus star Michel Platini will run to replace the departing (at least that’s the plan as of now) Sepp Blatter come February of 2016.

That means the man who once helmed the richest soccer confederation in the world could well be taking the only step up the ladder possible in the world of international soccer. It almost seems as if the writing is on the wall before any candidate has officially declared, with the same report indicating that Platini has the support of four confederations — CONCACAF, CONMEBOL, AFC (Asian Football Confederation) and UEFA.

However popular the name of Platini may be with other confederations, the question still remains if he is the right man for the job. Could it be that the group backing him is really looking more for the status quo and less so for someone willing to really rock the boat?

After all, we’re talking about two confederations highly linked to putting their hands right inside the cookie jar and getting caught at it. We’re also talking about the AFC, which is home to Australia and has been known for some time to have tried to bribe its way towards hosting the 2022 World Cup that eventually went to Qatar.

So, perhaps before anointing Platini as the “right guy” to lead FIFA forward maybe we try and take a look at the man and his accomplishments, failures and platforms before declaring him the anti-Blatter. Not coincidentally, same policies go for those who package themselves as exactly that…after all, can anyone at the highest levels of FIFA be trusted right now?

Being head of UEFA can’t be the only qualification to become the next FIFA president. The next president must lay out an agenda of real reforms and show true leadership in the face of a group of (mostly) men completely resistant to change.

To that end, Platini stood unopposed for a third term as UEFA president in part by calling for a “better FIFA.” For many, the real question is just what does Platini mean by a “better FIFA.”

Therein lies the first problem with Platini, as he has spoken in platitudes about what needs to be done, but has been light on action despite being a member of the executive committee since 2002. No real reform has come despite his popularity and supposed pull within that group.

Additionally, critics point out that it his relationship with Qatar and former Qatari soccer official Mohammad bin Hammam isn’t exactly the squeaky clean image or personification needed to help really lead this organization out of the darkest of times. 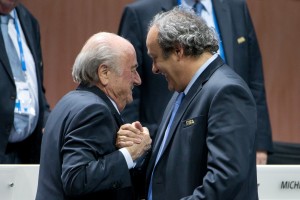 Some have suggested Platini has been heavily influenced by his own French government in his vote for the Qatari bid back in 2010. While the allegations have surfaced, it should be noted that very little in the way of proof has been put forward.

In an organization like FIFA its hard not to be connected to some of the shadier figures, if only because so many existed on previous executive committees. Association alone can’t be enough to blacklist a person from candidacy, but as we ramp up to the February vote, those in the media need to overturn every stone and follow every lead in vetting the candidates that will come forward.

The question is, can change come from someone so engrained in what FIFA has been about for the past 30-plus years?

One way of getting change to happen is show how these reforms would actually end up benefiting the bottom line of not only FIFA but the confederations and national federations as well. Money talks, especially within FIFA circles and showing how transparency is not only a good thing, but a profitable thing should speak loud and clear to this group.

The good news is that Platini has been pretty good about taking some tough stances on issues within UEFA. Financial Fair Play hasn’t been a hugely popular situation for some of the biggest clubs with the deepest pockets, but Platini has been willing to see the reform through to date and it has arguably been paying some dividends already.

He’s also been unafraid to crack down hard on fan violence, making sure to help in giving banning orders and making national federations pay for fan behavior with moves that hurt them where it counts the most — the pocketbook. Playing games at both the club and country level behind closed doors certainly is a deterrent (or at least it can be) for most clubs. Lost revenue means a lot to smaller clubs when facing the likes of Man U or Barcelona come a European night. Same for the likes of Slovakia, for example, as it hosts a Germany or Italy, etc.

But, the reality is Platini can only do so much and push for so many reforms without the backing of the rest of UEFA’s national federations and club teams. If there is one other good sign, many groups have followed Platini’s leadership, and given his experience within current FIFA politics and aggressive tone on reforms within UEFA he could be the guy to lead FIFA in to the era of true reform.

There’s no doubt Platini has his critics, and it is important to notice what they are saying and acknowledge that he has had some short comings, but in the end Platini likely represents the candidate that is best to bridge the old guard (hint phase them out) and bring in new life and new bodies to FIFA’s inner workings.

In other words — Platini appears to not only be the right guy, but he’s coming at the right time.