One of the great things about soccer and specifically writing about soccer is that as writers, we sometimes get to take in things and write about things as soccer fans. While we write about soccer and talk about soccer in a professional and impartial way all the time, every writer on 32 Flags is at our core, a fan just like everybody else. In June, fellow 32 Flags writer Jeff Snyder and I got a chance to take a trip to New York City to go to a special event and met some great people along the way.

The Liverpool Former Players Association, named 5 Times, is an charitable organization comprised of former Liverpool players who raise money for various causes. One event 5 Times does is to tour a part of the world with some Liverpool legends as they sit down with fans to have some fun for a couple hours telling stories from their career, their time at Liverpool and what they’re doing now that they aren’t playing soccer anymore. For some fans, these legends will also engage in a meet and greet as they sign autographs and pose for pictures.

In New York City, Jeff and I had the pleasure to meet Didi Hamann, Jason McAteer and “God” himself Robbie Fowler. The three were hilarious and provided a great time for everyone, even if they weren’t Liverpool fans. We also got to meet the guys in the meet and greet. Here is me posing with the players. Yes, I am wearing an authentic David James goalkeeper kit from 1995. It’s definitely a terrible looking kit and was so ugly, Jason McAteer, who played for Liverpool in 1995, joked about it, but it’s definitely a rare jewel in my kit collection. 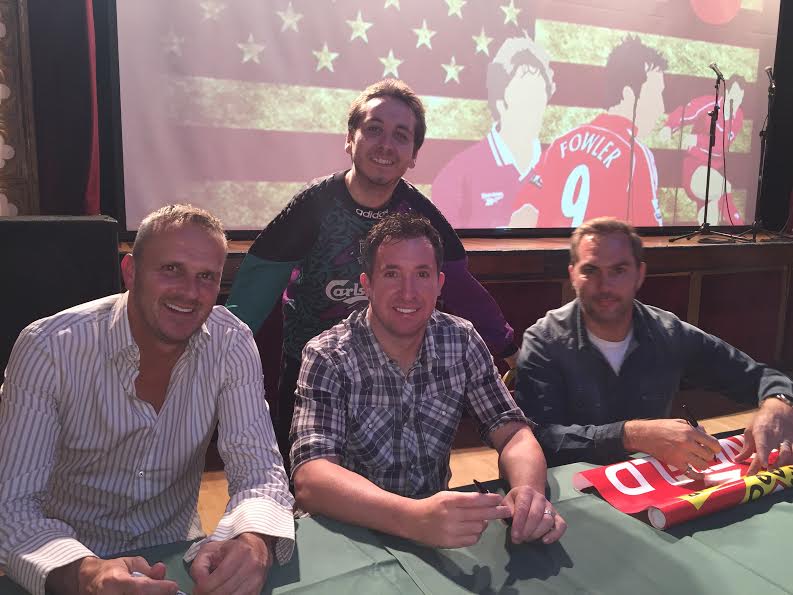 Yes, I know that kit is terrible looking. 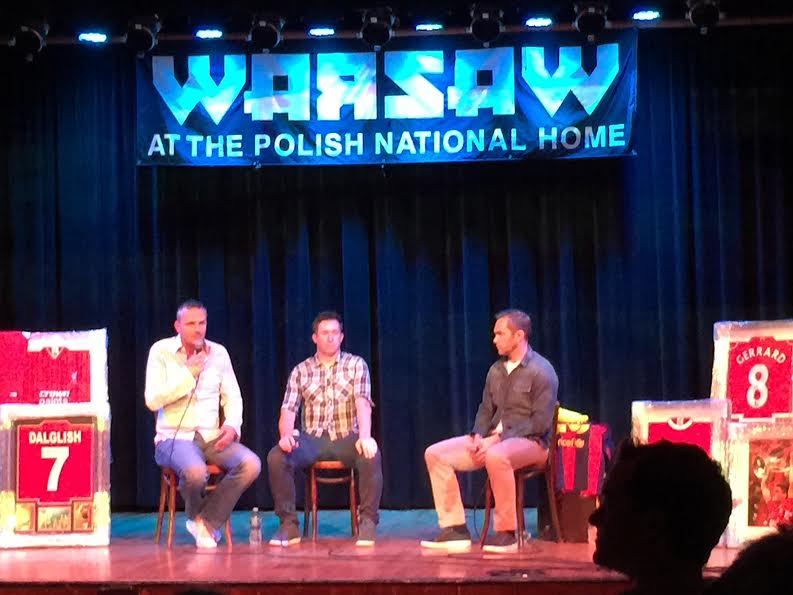 During the event, Jeff and I got to talking with some people and met Riain and Roland. Riain is the main bartender for the The Boot Room at the Irish American Pub & Restaurant in the Financial District in Manhattan near the Fulton St. station. The Boot Room is the place for the NYC Kopites Liverpool supporters group. In addition to having viewing events for games, The Boot Room has also been known to bring in such legends as Jamie Carragher, Jan Molby and John Barnes for meet and greet events. Upcoming events include a three day event from September 11 to the 13th for the Manchester United/Liverpool game with the guys from The Anfield Wrap as they help open Carragher’s Pub & Restaurant near Times Square. Also, on September 26, Liverpool midfielder from the 80’s, Ronnie Whelan will be at The Boot Room.

Through Riain and Roland, I also met Brian, the owner of both the Irish American and Carragher’s. Brian and Roland helped with forming The Boot Room and it is absolutely beautiful. The Boot Room is located downstairs from the Irish American and is full of Liverpool mementos from over the years. The great thing is, while The Boot Room is a Liverpool bar, the bar is great for all fans, even if you don’t root for Liverpool. The staff and patrons are friendly as can be. You may be subject to some banter if you’re wearing an Everton or Manchester United shirt but it’s all in good fun. Here are some pics of The Boot Room. 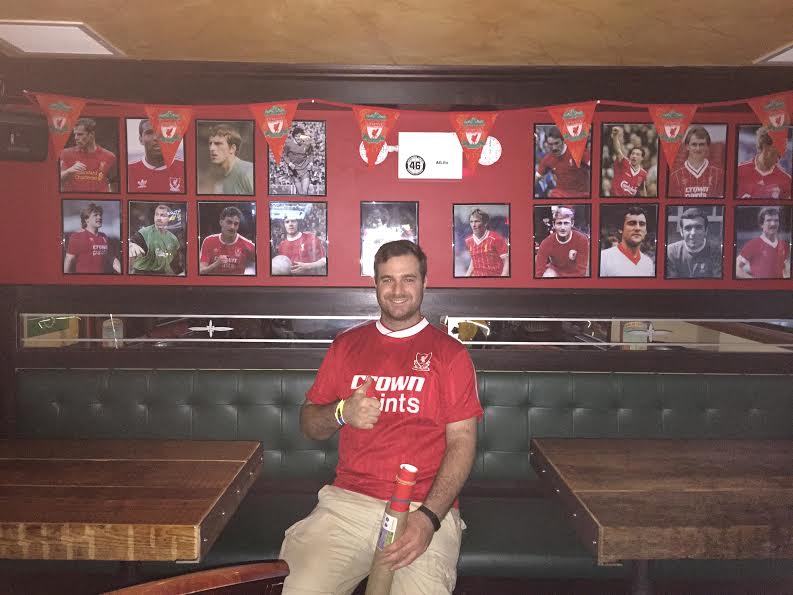 Jeff at The Boot Room 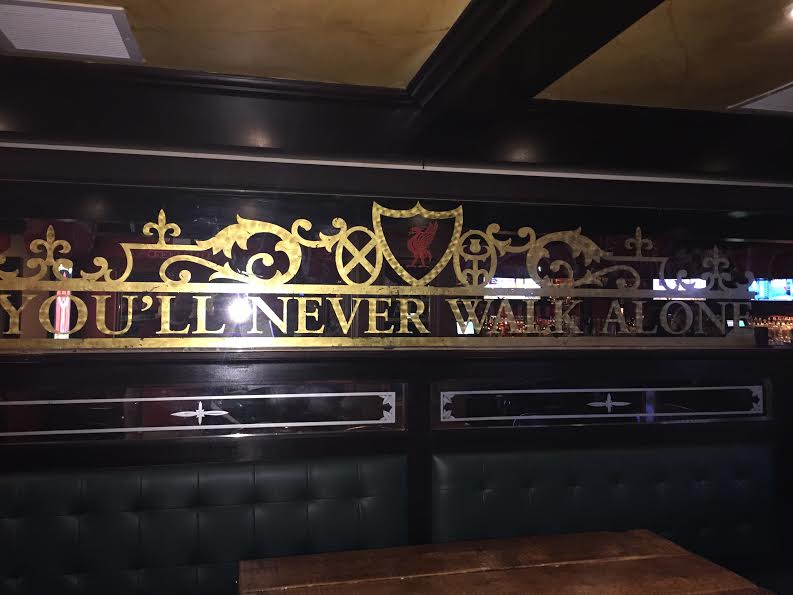 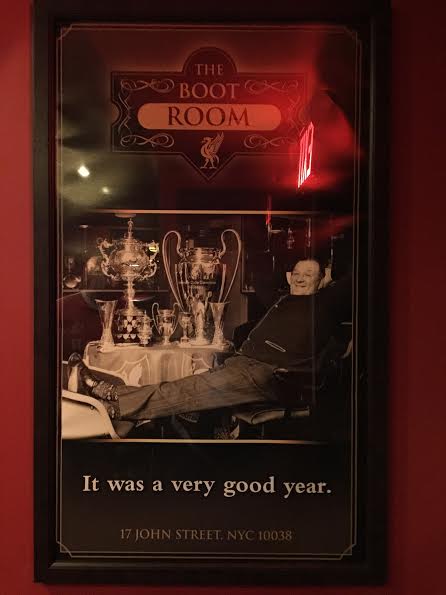 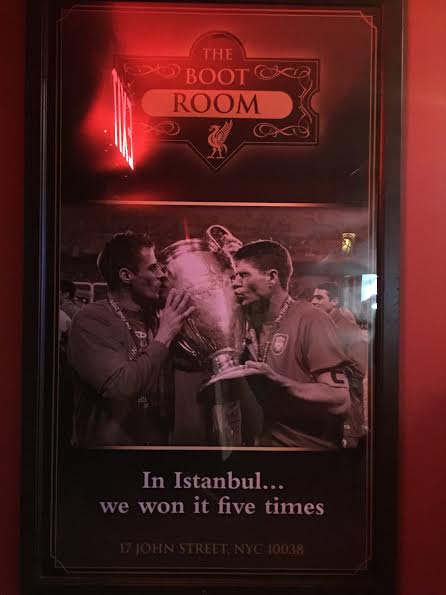 Even Robbie Fowler came back to The Boot Room to autograph this beautiful sign of him.

After a night of great food (recommend “The Glen”), great drinks with great friends and enough karaoke to lose your voice, it was time for Jeff and me to go. This place is definitely the ultimate if you are a Liverpool fan and are living in or are planning to visit New York City. Even if you’re not a Liverpool fan, I promise they will welcome you just as well if you were a Liverpool fan. Feel free to go in and have a meal and a drink and enjoy some soccer talk with some great people.

I wanted to write this piece because our experience with the NYC Kopites and the people with the Irish American is what’s so great about the soccer supporter culture and something that is so unique when it comes to soccer supporters compared to supporters of any other sport. What the NYC Kopites have for Liverpool is something that every team has so whether you’re a Liverpool fan or a Manchester United fan or a Bournemouth fan, you’ll have a great time hanging out and talking soccer with some great supporters groups throughout the country, especially as the EPL season is starting up. It may sound cliché but a supporters group is really like a family and Jeff and I want to thank those at the Irish American Pub and Restaurant and The Boot Room for welcoming us with open arms. Thank you to Riain, Roland, Brian and anyone else we met for a great night talking soccer and thank you for doing your part in growing the game in the United States. I’ll see you the next time I am in NYC.

(Note: This is not a sponsored post. Neither Jeff or I received any compensation for writing this article or for attending any of these events that were talked about)