On the third day of the tournament the reigning champions, Japan, will take to the artificial turf of BC Place in Vancouver to defend their first FIFA Women’s World Cup title. Luckily for them, this group poses next to no threat to the chances of qualification for the Round of 16. The real fun in this group could be figuring out which side will advance through to the next round with Japan, as all three teams are making their debut in a Women’s World Cup.

Player to Watch in Group B: Lara Dickenmann, Switzerland 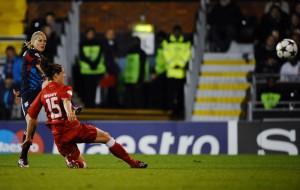 LONDON, ENGLAND – MAY 26: Lara Dickenmann of Lyon scores the second goal during the UEFA Women’s Champions League Final between Lyon and Turbine Potsdam at Craven Cottage on May 26, 2011 in London, England. (Photo by Laurence Griffiths/Getty Images)

The Swiss side blazed a trail of goals en route to easily qualifying out of UEFA for this World Cup. Leading the way for the scoring borage was Dickenmann, who put in 11 goals during qualification. While other sides may have more experience or better quality in defense, no side as a better attacking option than the Swiss.

Oh, and did we mention that all happened as she played a midfield role for the national side? The beauty of Dickenmann’s play is that she is perhaps the most versatile player on the pitch in this group. She frequently bounces between midfield and fullback duties with her club side, Olympique Lyonnais in France. She also has major ties to the United States, starring for Ohio State from 2004-08. Since that time she’s been a member of Olympique Lyonnais, making 111 appearances and scoring 55 goals in her seven-year stint with the club.

While some will give the nod to 2012 FIFA World Player of the Year,Homare Sawa, Dickenmann is perhaps the most important player on any squad in this group.

On paper this group seems pretty straight forward — Japan and Switzerland are miles ahead of Cameroon and Ecuador. However, one has to wonder if Cameroon is a bit slept on heading in to this World Cup.

No doubt the debutants are massive underdogs, but this is one of three sides in this group making a debut in the Women’s World Cup. That makes its experience in the 2012 Olympic Games vital to playing on this type of stage.

That experience ended with a last place finish in the 12-team tournament, but it was more about building experience and the side did rebound to qualify out of CAF. If any side is going to surprise in this group one could point to the experience of Cameroon as a major asset heading in to the competition.

Most Important Game: Japan vs. Switzerland

Who wants to have the easiest time of it in the Round of 16? Thanks to the schedule in Group C, we’ll find that answer out in the opening matchday for this group. There’s little doubt that Japan and Switzerland are light years ahead of the other two members of this group, and that means their first matchday clash will be vital to control of the group.

Take the full three points and this group is likely the victors to rule. Split the points and goal differential could get really interesting. Take a loss and you can likely kiss an easy matchup in the next round goodbye.

For Switzerland, winning over the reigning champions would be a huge statement and step up on the international stage. Japan winning would signal it is ready to defend its title and stay amongst the best four or five women’s national teams around the globe.

Teams To Automatically Move On: Japan and Switzerland

There is just so big a gulf in talent level and execution in the Women’s game that anything other than this result would be a massive surprise. About the only question in the group is if Switzerland can make a statement during group play in its first FIFA Women’s World Cup. Expect Japan to rule the group, with Switzerland going through on six points with wins over the minnows of the group.