Snapchat has been used for a variety of things and like various forms of social media, become a tool for celebrities, athletes and teams to interact closer with fans. What Giovani dos Santos did may be a first.

Dos Santos was fined by MLS this past weekend for arguing a referee call and participating in a “mass confrontation” with other Galaxy players on the referee in the LA Galaxy’s 1-1 draw against Sporting Kansas City. It’s against the rules for players to surround a referee during a game and if anyone is to go to the referee to argue a call, it’s the team captain. Otherwise, players and the team could be subject to warnings and fines.

The Galaxy striker didn’t quite agree with, well the original referee call for starters. Dos Santos especially didn’t agree with the memo he got from MLS notifying him of his fine. In fact, dos Santos posted his memo on Snapchat. 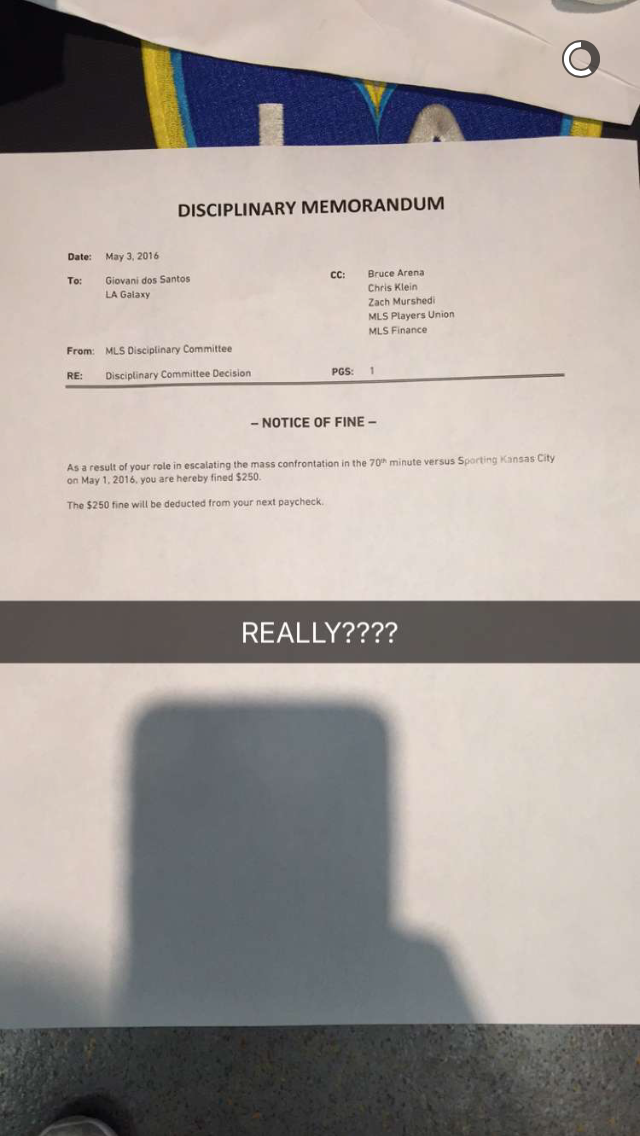 Maybe Giovani dos Santos was upset about the call, maybe he felt this memo and fine was a waste of his time since he was only fined $250. According to the MLS Player’s Union, dos Santos made $5,750,008 last season/$110,577 per week, so I’m pretty sure there isn’t a risk of dos Santos not being able to pay his bills this month. While $250 may be a deterrent for an MLS rookie making $60,000 a year to not participate in a mass confrontation, it isn’t for a superstar like dos Santos.

But rules are rules and dos Santos was busted. We’ll see if he learns his lesson the next time there is a controversial call.