MLS Commissioner Don Garber recently announced the expansion plan for the league to eventually go to a total of 28 teams. A league that only had 12 teams just 1o years ago is looking to go from 20 to 26 teams by the spring of 2020 and to 28 at an unknown date.

While Garber revealed the expansion plan, as well as potential markets who will bid for a team, he didn’t really explain what the structure of the league would be and nobody exactly knows how these 28 teams will be aligned. MLS is already big enough as it is that a single table, like what is done in soccer leagues around the world, cannot happen.

So what is the ideal structure? If 28 teams is inevitable, and it would because no one is going to turn away over $600 million in expansion fees, it means that the current two-conference structure is near impossible if MLS still expects every team to play against each other at least once. Under its current structure, where conference rivals play each other two to three times a year and everyone else once, that means each team would play a minimum of 40 regular season games in a 28-team league. There are already concerns the season is too long now and there’s just 34 games, likely. With that added travel, along with the potential of a new tournament featuring MLS and Liga MX teams, it would be disastrous.

My league structure idea would be for MLS to look smaller as they are expanding. Instead of two conferences of 14 teams, there would be four divisions of seven teams separated by geography. Assuming teams 23 and 24 will be LAFC and David Beckham’s Miami team and 25 and 26 will be Sacramento and St. Louis because they look like clear favorites for expansion teams at this point, a divisional map falls perfectly. 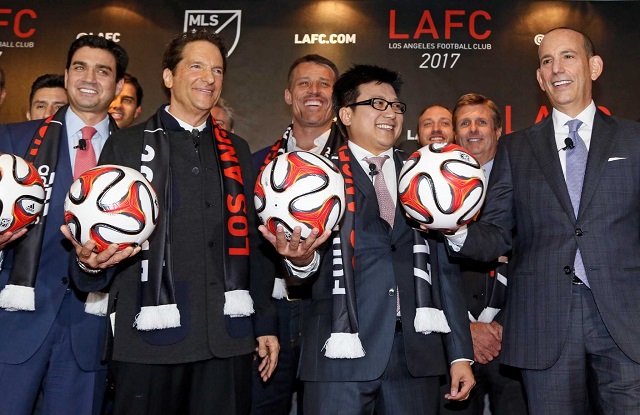 Western Division (a.k.a. The I-5 Division) 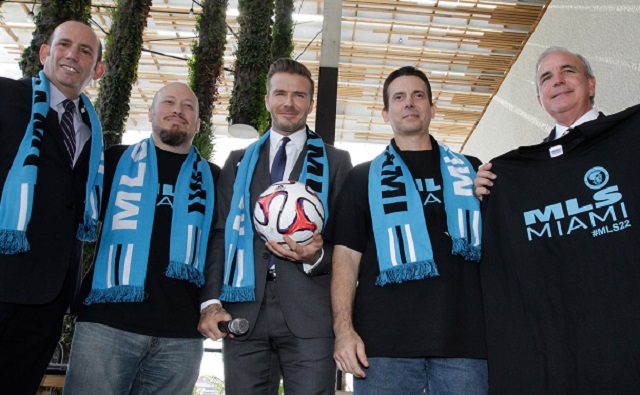 Former England and Manchester United star, David Beckham(C) poses for photos after holding a press conference at the Perez Art Museum Miami, in Miami, Florida on February 5, 2014. Beckham said Wednesday that he will buy a US team to play Major League Soccer and bring it to Miami, confirming the worst-kept secret in world football. At left is Major League Soccer Commissioner, Don Garber(L) and Miami-Dade County Mayor, Carlos A. Gimenez is at right. AFP PHOTO / Alexia FODEREAlexia Fodere/AFP/Getty Images

In this structure, everybody plays their divisional rival twice (home and away) and everybody else in the league once a year (alternating home and away every other season) for a total of 33 games. Everybody plays in one fewer game at 28 teams than this past season at 20. There would be more games played (462 to 340) in total because there are more teams, even though everyone plays in one fewer game, so there would still be more revenue generated by the league. Everybody plays everyone else at least once so the stars of the league will still be able to theoretically travel to each stadium within two seasons while playing more away games closer to home and limiting travel. And this sets up divisional rivalries that are not only close geographically but enhance the rivalries that MLS already has because it would have a better chance at deciding who qualifies for the playoffs.

Speaking of playoffs. I personally think 12 teams advancing to the playoffs in a 20-team league right now is way too much. But once MLS gets to 28 teams, 12 playoff teams is an ideal setup. And no, MLS should not increase the number of playoff teams to keep with expansion teams, but that would be a realistic possibility.

Anyway, in my system, the top three in each division advance to the MLS Cup Playoffs. Second and third place in each division play each other in a single-elimination game where the second-place team is at home. The winner faces the divisional winner in a home and away series to determine the divisional champion. The four divisional champions play each other in another home and away series where matchups are based on regular season point totals. The one seed plays the four seed and two plays three. Winners play in the MLS Cup Final where the highest seed hosts. The structure is different but you would be playing the same amount of games for that system compared to now.

If MLS were to do 28 teams, they would be wise to adopt this idea. It checks off most boxes and is a very realistic and practical idea to implement. I hate to even propose the idea, but this could theoretically make it easier for MLS if they someday felt like going to 32 teams. With all this money coming in and many cities across the country interested in getting into MLS, MLS is in the driver’s seat to expand as much as they want. They just need to remain one step ahead and make sure they don’t get too ahead of themselves as well as update their league structure to keep MLS competitive.