Wow. Less than a week after Fabian Delph came out and said he was staying at Aston Villa (UPDATE: The official website has pulled down the article so here’s the BBC reporting on it), this happened.

And then this happened.

Manchester City are delighted to announce Fabian Delph has joined the Club from @AVFCOfficial #WelcomeFabia… https://t.co/fOUxH2n8OU

‘Wow’ sums it up perfectly. Delph’s £8m release clause was triggered prior to his initial decision to stay at the Birmingham club. This will be a great deal for Manchester City. Not only is he a quality midfielder who is still quite young, Delph will join Raheem Sterling in filling City’s English quota. He should also aid in a renewal of  City’s midfield that got overrun too often last season. All of that for £8m. 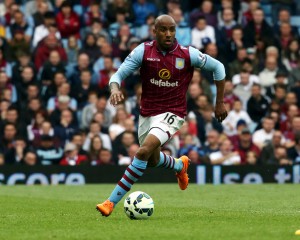 BIRMINGHAM, ENGLAND – MAY 24: Fabian Delph of Aston Villa during the Barclays Premier League match between Aston Villa and Burnley at Villa Park on May 24, 2015 in Birmingham, England. (Photo by David Jones/Getty Images)

For Delph, this move represents a high risk, high reward move. At Manchester City, he will not be able to expect to start. Yaya Toure, Fernandinho, Fernando, or Nasri all could command a spot above him, depending on the formation manager Manuel Pellegrini decides to go with (4-4-2). Those players are aging, however, and Yaya Toure has been linked with a move away for the last three windows. Should Delph nail a spot in the starting lineup  down, he can expect a lot of success in his future.

After surely losing one talisman to Liverpool in Christian Benteke, Aston Villa will be reeling after losing one of their few remaining shining lights. Their only hope to staying in the Premier League next season, which they barely succeeded in with Benteke and Delph, will be new signings Idrissa Gueye, Scott Sinclair and Micah Richards. Aston Villa manager Tim Sherwood will also be hoping players like Gabby Agbonlahor and the highly rated Jack Graelish can step up.

The final aspect of this transfer that needs to be looked at is why the sudden change of heart for Fabian Delph? This is a club that 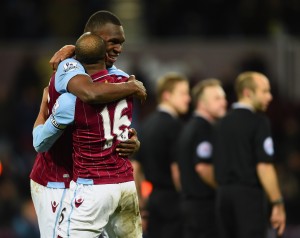 during the Barclays Premier League match between Aston Villa and West Bromwich Albion at Villa Park on March 3, 2015 in Birmingham, England.

had nurtured him and made him captain. He had succeeded in representing England as a Villain. What changed his mind about staying after only a week? The only thing that becomes apparent is the inevitable sale of Christian Benteke.

Prior to Liverpool agreeing to meet the release clause in Benteke’s contract, Villa stood very firmly that he would not be sold. Hoping that the big Belgian would remain at the club, and probably getting assurances from the manager that more reinforcements were on

their way, convinced Delph to remain at the club. As soon as it became apparent that Benteke was on his way out, Delph decided it was time to move on as well.

This should, and will, be taken as a sign of deep concern for Aston Villa from its fans. With two of its most important players leaving in a single week, might this be the season that Villa goes down?