Last month, it was Liverpool making the big signings. It seems that Manchester United want their turn in the spotlight. They’ve made some huge signings already this summer, with Schweinsteiger having been confirmed today as well. Morgan Schneiderlin will be the next transfer for a reported £24m, rising to £27m with add-ons.

With this move, we can expect Manchester United to have a totally revamped midfield in the coming season. As in, scary revamped. We can certainly expect Schneiderlin, who was a key fixture for Southampton last season, to become a regular starter in this squad. Surely, a move worth £27m is a clear indication that Woodward and Van Gaal see him as a long term replacement for Michael Carrick. The French midfielder will be very comfortable linking 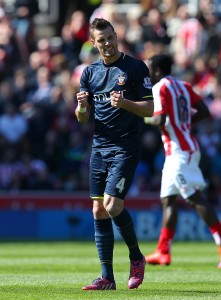 Morgan Schneiderlin during the Barclays Premier League match between Stoke City and Southampton at the Britannia Stadium on April 18, 2015 in Stoke on Trent, England.

defense and attack. This ability saw him as a key component of a stingey defense that lead to Southampton rocketing up the table.

This would also indicate that the expectation would be that United will player either a 4-3-3 or a 4-2-3-1 next season. Either would certainly work with the
holding midfielders and attacking midfielders they have purchased between this season and last. With the purchase of Schneiderlin, Manchester United’s

midfield, and team, have been taken to a new level. While United still have worries in defense, there are plenty of rumors going around that they are seeking to fix this. Should that happen, it will be tough for Liverpool, Tottenham, and Southampton to work their way into the Top 4.

Southampton, however, find themselves at a bit of a crossroads. Their entry back into the EPL has been meteoric, with two seasons of unprecedented success. Schneiderlin was one of the last holdouts from the team that caused so many waves their first season in the Premier League. Manager Ronald Koemonhad even earmarked the midfielder as a key player for the club. Last season, a big part of their play was how defensively sound they were. This season, they have lost Schneiderlin, Clyne, and Alderweireld. Three of the most important players to that defense. Jordy Clasie has been the rumored replacement for Schneiderlin and Clyne has already been technically replaced. One just has to wonder how long this great club can keep up replacing it’s best players every season.