It’s an even numbered year so that means there is going to be plenty of soccer ahead this summer. Big tournaments in France and the United States in June mean that national teams in Europe and the Americas are warming up for a busy summer.

Before any of those meaningful games get underway, most national teams use this time for a few friendlies to see how their squads are shaping up and who will make the final cuts. For some countries, it’s going a little better than others.

The USMNT – Since losing to Guatemala back in March the USMNT has been on a strong run of form. They qualified for the hex in World Cup qualifying, and they’ve looked good in a few of the Copa America tune up matches they’ve played. Their improved play is likely due to the inclusion of young players that has given the team a spark. Most notably, of course, is 17-year-old Christian Pulisic who scored his first goal for the national team in their 4-0 drubbing of Bolivia.

Watch 17-year-old @cpulisic_10's first international goal to give the #USMNT a 4-0 lead against Bolivia. #USAvBOLhttps://t.co/6c8BUGqQAb

If the US can continue their play into this summer’s tournament, coupled with a group that the US should exit along with Columbia, then it could be an exciting Copa America for the hosts.

England – Another team that has been buoyed by the inclusion of new talent in recent fixtures has been England. In recent matches, the Three Lions have looked very strong. Their 3-2, come from behind win over Germany in March was a highlight of their recent string of friendlies. Dating back to last June, England have only lost twice. Youngsters such as Marcus Rashford should find their way onto the squad headed to France. Rashford, along with the likes of Harry Kane, Daniel Sturridge, Raheem Sterling and Jamie Vardy should give Roy Hodgson plenty of options going forward.

Historically England has looked great leading into tournaments before things started to fall by the wayside, but with fresh faces around the team, maybe this year England are more than just hype.

France – The last time a major international tournament was held in France was the 1998 World Cup and the hosts won it all. This year France once again has hosting duties, and they are considered to be one of the tournament’s favorites. They fell just short of making the Semi-finals of the world cup, and would have likely made it to the finals in Brazil all things considered. Since then they’ve only gotten better. Kingsley Coman and Dimitri Payet have become stars with their clubs and could give Les Bleus an even more dangerous attack. They’re also one of the most in-form teams for no other reason than this incredible free kick from Payet.

And because it was so good why not see it again from another view. Dimitri Payet free kick. Incredible. pic.twitter.com/xXKrLuFWR0

Chile – After winning the Copa America, things haven’t been quite the same. They recently lost to Jamaica, before that they lost to Uruguay and Argentina, two teams they’ll need to be able to beat if they want to defend their Copa America title. Coach Juan Antonio Pizzi who took over for the hugely successful Jorge Sampaoli, hasn’t been able to generate the same kind of results. Chile has one more friendly against Mexico to try to turn their form around before they get to face Argentina in the Copa America

Italy – Besides a win over Scotland on Sunday Italy have failed to win since their final Euro qualifying match against Norway. Draws to Romania and Spain, as well as losses to Germany and Belgium, have left the four-time world Champions in a bit of an identity crisis. Chelsea-bound manager Antonio Conte has been pushing his team hard recently in hopes of avoiding another group stage exit. The Italians will be without MLS MVP Sebastian Giovinco who was snubbed by Conte earlier this week. 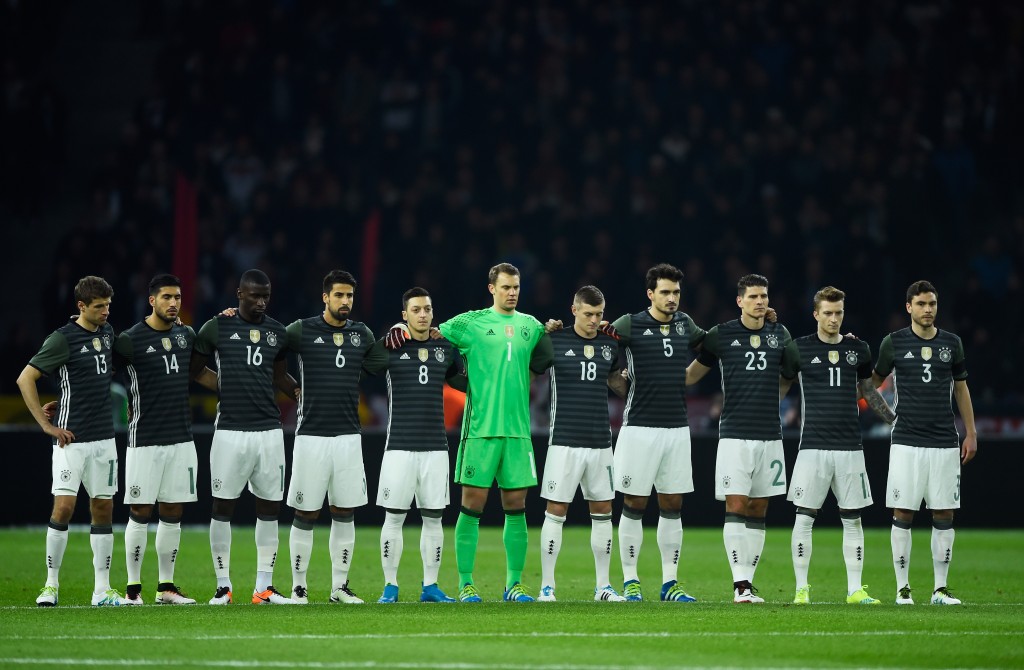 BERLIN, GERMANY – MARCH 26: Germany players observe a minute of silence for the victims of Brussels terror attacks prior to the International Friendly match between Germany and England at Olympiastadion on March 26, 2016, in Berlin, Germany. (Photo by Mike Hewitt/Getty Images)

Germany – The Biggest issue facing Germany is their defense, particularly the fullbacks. Ever since winning the World Cup 2 years ago, Germany has been in a bit of a slump. They finished top of their qualifying group but it wasn’t an impressive campaign. Coach Jochim Löw has been experimenting with the defense ever since, trying to find a way to replace the irreplaceable Phillip Lahm. Germany has lost three of their last five matches, including a 3-1 defeat to Slovakia on Sunday. While in the match against Slovakia, Germany was missing some key players, it’s still been a troubling run of form for a team many thinks should be looking to win at the Euros. Fortunately for Germany, they typically pick up their play when major tournaments begin. So write off the Germans at your own peril.