Greece is in serious trouble right now, as a country, a football squad, and as a football league.

Today, Greek banks shuttered their doors for at least the next six business days and ATM withdrawals are being heavily limited. The Greek government even shut down their own stock and bonds markets for the rest of the week. An austerity vote is coming this weekend. Greece, quite simply, cannot pay its bills, and realistically may be forced to leave the European Union in coming months. 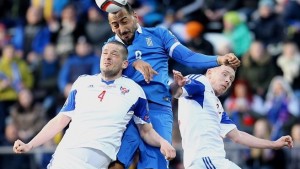 Kostas Mitroglou of Greece in action with Atli Gregersen of the Faroe Islands during their UEFA EURO 2016 qualifier. ©AFP

So what does this have to do with football? We’ll get to that in a minute, but the football team is doing about as well as the national economy right now. About two weeks ago, the Greece Men’s National Football Team (ranked 25 in the world) lost to the Faroe Islands (currently ranked 102, their highest ever) for the second time of this Euro qualifying cycle.

Let’s say that again: Greece lost twice to the Faroe Islands in a span of six months.

The first Faroe Islands loss resulted in the firing of a coach; the second put Greece one game away from being eliminated from the UEFA Euro 2016 qualification. Other than these dreadful losses, Greece lost to Romania and Northern Ireland and managed draws against Finland and Hungary.  They woefully sit in last place in their group without a single win.

Last summer seems like decades ago for the Greeks. The 2014 World Cup was kind to them as they advanced out of a brutally even group (Ivory Coast, Colombia, Japan) before losing on penalties to surprise Costa Rica. Momentum seemed to be on their side heading into 2015. But then their coach left. 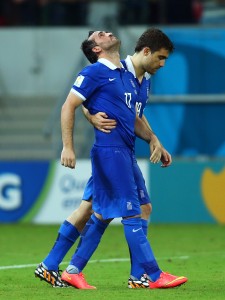 RECIFE, BRAZIL – JUNE 29: Sokratis Papastathopoulos of Greece consoles teammate Theofanis Gekas after a missed penalty kick during the 2014 FIFA World Cup Brazil Round of 16 match between Costa Rica and Greece at Arena Pernambuco on June 29, 2014 in Recife, Brazil. (Photo by Jeff Gross/Getty Images)

After only having two managers from 2001 through World Cup 2014, the national team has burned through three coaches since Fernando Santos left the day after the 2014 World Cup. Nothing seems to be working, but who can even tell with such a coaching carousel? Maybe Greece is slipping back to their pre-2004 form. After all, their success at the UEFA Euro 2004 was such a surprise because it was only Greece’s second appearance in the tournament.

There’s no way Greece should be slipping this badly. There are plenty of talents on this team in the prime of their career, such as Sokratis (Borussia Dortmund), Panagiotis Kone (Udinese), and Kostas Mitroglou (Fulham). Greece isn’t a world-beater, but they should be better than Romania, Northern Ireland, Finland, and certainly the Faroe Islands.

Connecting to the Economy

While the Greek economy, FIFA corruption, and Greek on-field failures catch the headlines, a seedy story of Greece football league corruption is developing. The chairman on Olympiakos (Greece’s dominant club team) was just suspended from all sporting activities after testifying to the alleged corruption in the Greece football league. This seems to be the tip of a gigantic, potentially league-shattering iceberg.

Prosecutors are seeking to prove that thirty-three individuals — including referees, league officials, and club chairmen — sought to fix match results. For example, the former head of the Greecefootball federation is currently banned from leaving the county. It remains to be seen what this ongoing court case means for Olympiakos, the Greek Football League, and even the Champion’s League. Either way, this case means that Greek football is reeling just as the rest of their nation is right now.

One can only hope that Greece and Greece football rebounds soon. The past month has been a cavalcade of negativity from football fans vandalizing historic sites to the launching of a third party integrity tour to the strange termination of Olmpiakos’ highly successful coach. Here’s to hoping that Greece finds a solution to their footballing problems — not to mention their more pressing economic problems — as soon as possible.