Norwich City beat Ipswich Town in the Championship semifinals and will advance to play Middlesbrough at Wembley Stadium for a chance to ascend back to the Premier League just a year after they were relegated from the top flight.

At Carrow Road, the Canaries welcomed Ipswich Town after both teams played out to a 1-1 draw at Portman Road just a week ago. Both teams looked even in that game, but Norwich came into the game a favorite being in front of their fans at home.

The mood was tense and the first half play reflected it as both teams seemed a bit shy to go on attack early on and very few chances were taken, the teams played very conservatively not wanting to be the first to make a mistake. The first half would end with no goals for either side and the aggregate score still even at the break.

The second half was a whole different story, as both teams seemed to break away from their anxious play from the previous period. This was especially true of Norwich all game as they had the majority of the chances throughout the match. 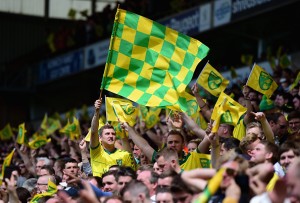 NORWICH, ENGLAND – MAY 16: Norwich City fans show their support prior to the Sky Bet Championship Playoff semi final second leg match between Norwich City and Ipswich Town at Carrow Road on May 16, 2015 in Norwich, England. (Photo by Jamie McDonald/Getty Images)

In the 48th minute, a great chance for Norwich presented itself when Nathan Redmond took a shot that was blocked at the line by Ipswich defender Cristophe Berra. However, Berra used his hand to turn away the shot and was sent off a red card, leaving his team with 10 men, and the referee awarded Norwich a penalty kick.

Wes Hoolahan scored from the spot and put up the Canaries 1-0 in the game and 2-1 on aggregate score. But, their joy was short lived as Ipswich got it right back 10 minutes later from a set piece when Tommy Smith received the ball in the box and somehow ended up beating the defense and the keeper for the equalizer.

Right when it looked like 10-man Ipswich was getting back into the game, Norwich turned the game around in their favor with a goal that broke the tie just three minutes later. A shot rebounded off Ipswich keeper Bialkowski, found Canaries midfielder Howson who calmly passed it to Nathan Redmond and he delivered a low shot that beat the keeper for the 2-1 lead.

From then on, it was all Norwich as they controlled the rest of the match and they even managed to score one more, this time from Cameron Jerome who was fed nicely by Nathan Redmond, and tapped the ball past the goalkeeper for the 3-1 Norwich win and 4-2 aggregate score.

Although not the result they wanted, we must applaud Ipswich Town on a great season. They fought valiantly and they were close to the final, but alas it was not meant to be for them. Hopefully for the Tractor Boys, they can continue their great play and perhaps they will be fighting for a spot in the Premier League soon.

The big news, however, is that the final is now set. It will be Norwich vs. Middlesbrough at Wembley Stadium, May 25th for a chance at the big league, a chance at £120 million (roughly $189 million American). Who will be the third and final team to achieve promotion this season?