The scoreline may have read 2-1 advantage Juventus following Tuesday’s Champions League semi-final first leg. However, it was hard not to feel like the real advantage was the Real Madrid.

Not only did most of the controversial calls from ref Martin Atkinson go the way of Madrid, so did most of the yellow card action ahead of the return leg at the Bernabeu next Wednesday.

Sure, Madrid went down 1-0 early on thanks to a great shot by Carlos Tevez, a timely back post run by Alvaro Morata and some questionable goalkeeping from Los Blancos’ Iker Casillas. Yet, Madrid did a great job in keeping the home side from being extra dangerous for most of the rest of the match.

In fact, the visitors saw things even up just about halfway through the first 45 minutes, thanks to some brilliant passing and an equally great header from none other than Cristiano Ronaldo.

There was also the fact that a header from James Rodriguez was just inches away from making this a 2-1 Real Madrid contest just before the half as well. 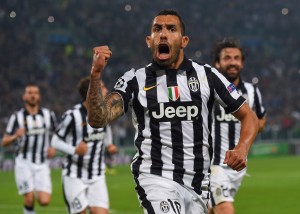 TURIN, ENGLAND – MAY 05: Carlos Tevez of Juventus celebrates as he scores their second goal from a penalty during the UEFA Champions League semi final first leg match between Juventus and Real Madrid CF at Juventus Arena on May 5, 2015 in Turin, Italy. (Photo by Michael Regan/Getty Images)

Given the opportunities and advantage in possession following the 1-1 scoreline, it would be easy to say advantage Juve. That’s especially the case after Carlos Tevez wound up with the winner from the penalty spot in the 57th minute.

No doubt that Madrid need to find a way to clam up Tevez, as he was a pest all over the place for the Old Lady of Turin. Tevez wasn’t just responsible for the rifle shot that led to the opening goal, nor just the penalty kick from the spot, but he was also responsible for countless dangerous opportunities for his side in this matchup.

It was clear that Madrid were missing some holding play in the midfield, and a return of Luka Modric in the second leg would do wonders towards helping that effort.

So why advantage Real Madrid? Throw out what you saw on Tuesday, because next Wednesday is going to be a completely different animal thanks to Juve’s inability to keep Ronaldo off the scoresheet.

Real Madrid is a team down just one goal heading back home and with the key away goal advantage.

If Los Blancos score first next Wednesday all the pressure is on Juventus for the rest of the match. The goal is simple and classic Real Madrid, take care of possession, score when the opposition breaks down and hunker down to frustrate the other side.

There may not be a team better at playing with the away goal advantage in Champions League history than Real Madrid.

Add in the fact that big names like Tevez, Chiellini and Arturo Vidal all have picked up yellow cards and suddenly the suffocating and physical style that Juventus would like to play on the road has to be re-thought. Losing any or all of those players in the process of going on to the final would be a major problem.

With four players on yellow cards heading in to the second leg, Juventus will have to adjust how it plays and that can kill a team that looks to play on the edge like the Old Lady does.

So, while the scoreline says 2-1 advantage Juventus on aggregate, don’t think for one second this is a disadvantage for Real Madrid as it heads back home.