We at 32 Flags are previewing every team in the English Premier League, two teams a day until the beginning of the season. Get ready as we preview your favorite team or maybe we can help you pick a team to root for if you are undecided so far. Today, we’re covering Stoke City.

The shock replacement of track suit model Tony Pulis lead many fans and pundits to correctly assume that a change in playing style was the reason. Why else would the owners get rid of the man who turned their team into consistent Premier League team, as well as the most unpleasant to play against? The hiring of Mark Hughes promised a more open and attacking style than the rugby-esque, bus-parking defensive style they had become famous for. 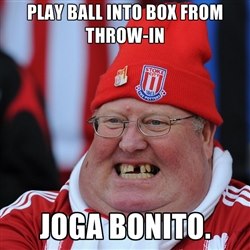 Last season, we saw a team actually striving to do just that, putting on some good displays, leading to a 9th place finish, no small feat considering the competition. This season promises to be much of the same, with the purchases of Bojan, the former ‘next Messi’ who is currently on a goal streak of 3 in 3, and the movements for Liverpool’s Oussama Assaidi and Norwich’s Nathan Redmond. As we predicted above, an 8th place finish would a good season for the Potters and a Capitol One Cup run would make it an excellent season.

What Stoke have going for them is that while they are seeking to play a more expansive game, if things start to turn on them they are more than capable to retreat back into their old defensive style. They played this style for years and several times last season it was almost a seamless transition back and forth. This ability can make them incredibly difficult to beat when they are on their day. They have been caught out, however, while playing more attacking. This will come with time for Stoke and this transition from EPL menace to middle table regular has been very interesting to watch, to say the least. If Bojan can recreate that early form that earned him the rave reviews he received only a few years ago, Stoke may be a team to watch in the middle table battle this season.