Alex Morgan, United States Women’s National Team superstar, is a pretty recognizable figure in women’s soccer. She has over 1.7 million Twitter followers, many young women that want to emulate her play on the field, many men that are fond of her beauty, and is seen as one of the key players of the USWNT.

With all her acclaim you would think the President of FIFA, Sepp Blatter, and other FIFA executives would recognize her at a ceremony where Morgan was named one of the best three women’s players in the world. But, they didn’t.

Let’s review that statement. The man that laughably calls himself “a godfather” of women’s soccer did not recognize Alex Morgan, who made her name at the 2011 Women’s World Cup, at a ceremony where she was being commended as a top player in the world of women’s soccer.

Alex Morgan in an interview with TIME Magazine said, “I feel like I’m fighting for female athletes. At the FIFA World Player of the Year event [in 2012], FIFA executives and FIFA president Sepp Blatter didn’t know who I was. And I was being honored as top three in the world. That was pretty shocking.” 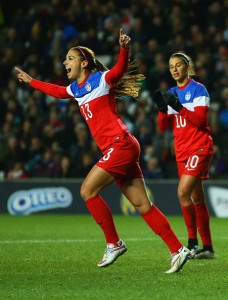 MILTON KEYNES, ENGLAND – FEBRUARY 13: Alex Morgan of the United States (13) celebrates as she score their first goal during the Women’s Friendly International match between England and USA at Stadium mk on February 13, 2015 in Milton Keynes, England. (Photo by Richard Heathcote/Getty Images)

To be honest, this is not surprising as FIFA has a long standing image of being corrupt, misogynist, and discriminatory. This view was most evident when a group of women’s players sued FIFA for discrimination when it was announced that the 2015 Women’s World Cup in Canada would be played on artificial turf.

This is still an issue as no men’s World Cup has even been played on artificial turf and no expense is left unpaid for the men’s pitches. Not to mention that it is proven that playing soccer on an artificial turf creates more chances for injury than playing in real grass.

Meanwhile, it was reported that the “godfather” rejected various offers by Scotts, the lawn seed and grass company, and many other grass companies to replace the artificial turf with real grass for free.

The reason FIFA declined these offers were because they didn’t include the installation of grass in the practice fields, and FIFA wanted players to practice and play on consistent surfaces.

But, with FIFA making more than $300 million in profit from the 2014 World Cup, and the total cost of replacing all 18 playing surfaces with grass is estimated at $9 million, you would think FIFA would splurge a little bit of their winnings on actual grass.

The group of players have since dropped the lawsuit stating that they don’t want any unnecessary distractions before the World Cup and will play on artificial turf in 2015, but FIFA (and Sepp Blatter) really need to be conscious of their women players, whether it be on the podium for World Player of the Year or in the Women’s World Cup.