How sweet would have Barcelona vs. Real Madrid been in the Champions League final? Talk about the ultimate El Classico. It had media members salivating over the crazy celebrity names on the pitch and likely to show up off it too.

UEFA bosses had to be salivating on the opportunity to showcase two of the most dominant and well-known names in the sporting world. It’s a no-brainer from a marketing, media and viewership standpoint.

Two giants of the world game going head to head with names like Messi, Neymar and Suarez going up against the names of Bale, Benzema and Ronaldo would draw easily the largest amount of eyes watching as possible.

There’s just on problem…on the pitch it was never going to be the matchup that was best for the game itself.

Therein lies the first problem with wanting El Classico on the grandest stage of them all. See, the Champions League final has become more and more a war of attrition over time, and another El Classico matchup wasn’t likely to produce a ton of watchable soccer.

So, perhaps we should thank old Real Madrid star Alvaro Morata for his tie-winning goal in his old home.

For all the greatness we see throughout the UEFA Champions League year in and year out, a scant few times have we witnessed that greatness in a final. Yet, those who have seen previous versions of El Classico can attest to the often-disappointing nature of the matchups between the rivals.

Not exactly what you want to hear when you are hoping to produce the most drama, the best possible matchup and showcase the beautiful game for…well, being beautiful.

With Juventus’ win on Wednesday the game itself won. At least the Champions League final has a chance of being what most go in to it hoping to see. 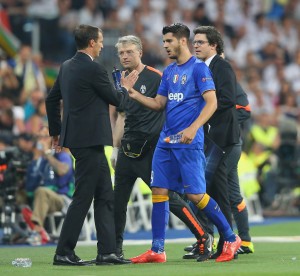 during the UEFA Champions League Semi Final, second leg match between Real Madrid and Juventus at Estadio Santiago Bernabeu on May 13, 2015 in Madrid, Spain.

Juventus is much more about being individually creative, with manager Massimiliano Allegri choosing to forego a rigid system to more over-arching concepts and fluid play based on how the game is dictating it needs to be played.

The Old Lady choked off opponents with a combination of stout defending and still attacking soccer, making it dangerous in counter attacks and continuous play through the midfield.

Barcelona’s success has been much more the product of the system that has made it famous for nearly 40 years.

Manager Luis Enrique studied under the same system that ex-manager Pep Guardiola made famous for this era of Barça success.

If ever there’s a team who plays the game in a beautiful fashion, but with a ruthless outcome, it is Barcelona. We saw that on brilliant display throughout the 2014-15 Champions League season, as Barcelona carved up opposing defenses with mind-numbingly brilliant passing and patience in attack.

It means we’ll get to see how much individual brilliance can be counted on, which side has the mental advantage and which side decides to adjust to the other in the correct fashion. Look at this matchup as the gift that could keep on giving.

We could see a giant mental chess match take place with the pieces to the match just so happening to be absolutely capable of the brilliance needed to break any system or player down. Not only will it mean fans could be treated to a master class in the mental side of the game, it will also mean a game that will look good to the naked eye.

It’s that type of matchup that the Champions League has been in desperate need of, one that showcases the differences in philosophy as much as it showcases who can spend the most money or which side dares to take a chance to win the European Championship trophy.

Oh and for those of you looking for drama, intrigue and star power…don’t worry, Juventus vs. Barcelona will have plenty of it for your tastes. Carlos Tevez, Gianluigi Buffon and Allegri all have caché for the Old Lady of Turin and we all know the names for Barcelona.

Buffon already weighed in on the matchup and perhaps the perception building that Juventus is just the bridesmaid to Barça’s European crowning.

“We will not be tourists in Berlin,” the veteran goalkeeper told the official Uefa website, via Goal.com.

“When you have the chance to play a Champions League final, you have to win it.”

No doubt it isn’t in line with the craziness that could happen with the weeks long build up of an El Classico game, but there also clearly isn’t a lack for drama and star power.

However, history also tells us why this is exactly the game the Champions League needs to boost the final as more than a disappointing end to an awesome tournament.

The history between the two sides suggests things are about as close as humanly possible.

H2H Juventus-Barcelona: Played 8 – W4-D2-L2. Both have progressed twice in the 4 KO ties they have played against each other.

While Juventus vs. Barcelona wasn’t the final most hoped for, thought of or may have wanted, it’s exactly the matchup that could finally give us everything we’ve hoped a Champions League final would be.