Sporting Kansas City manager Peter Vermes and SKC/USMNT central defender Matt Besler gave some comments today to the Kansas City Star about Jurgen Klinsmann’s fitness comments. Klinsmann has stressed fitness and even went as far as saying that some players aren’t training enough in the preseason to effectively perform for the USMNT and some don’t have the knowledge to get fit properly for international play.

In the article, Matt Besler talked about taking a break from the game after being eliminated from the first round of the playoffs. Except for a couple weeks to get married and go on his honeymoon right after winning the MLS Cup in 2013, Besler has played with virtually no extended breaks since March 2012. While it’s unknown who Klinsmann was directing his comments toward, some pointed at Besler as a possible suspect since he hasn’t played a game since October 26.

Besler returned from USMNT duty and talked about his current fitness level as well as Klinsmann’s comments.

“I think it’s unfortunate that a player has to answer questions about fitness. I won’t say anything about [Klinsmann’s] comments. He can say whatever he wants.”

“Personally, fitness is not an issue for me. My goal is to be in my peak fitness on March 1. That’s when my season starts. It goes from March to December. So on Jan. 15, [Sporting KC fitness coach Mateus Manoel] devised an offseason plan for me to hit my peak fitness on March 1, and I think that’s what most of the guys did. If the expectation is different, that’s something that needs to be discussed so we know going into a camp where we need to be.”

Peter Vermes also made his opinion known. Vermes, member of the 1990 USMNT World Cup team, is arguably the MLS manager who takes fitness the most seriously. His approach caused people to coin Vermes’ method “Sporting Fit” meaning that players would need to go the extra mile in order to be fit in Vermes’ system. It caused some players like Benny Feilhaber to struggle at first when playing in KC. If anyone within the US Soccer landscape would agree with Klinsmann or at least understand his actions, it would be Peter Vermes. Even Vermes didn’t care much for Klinsmann’s comments. 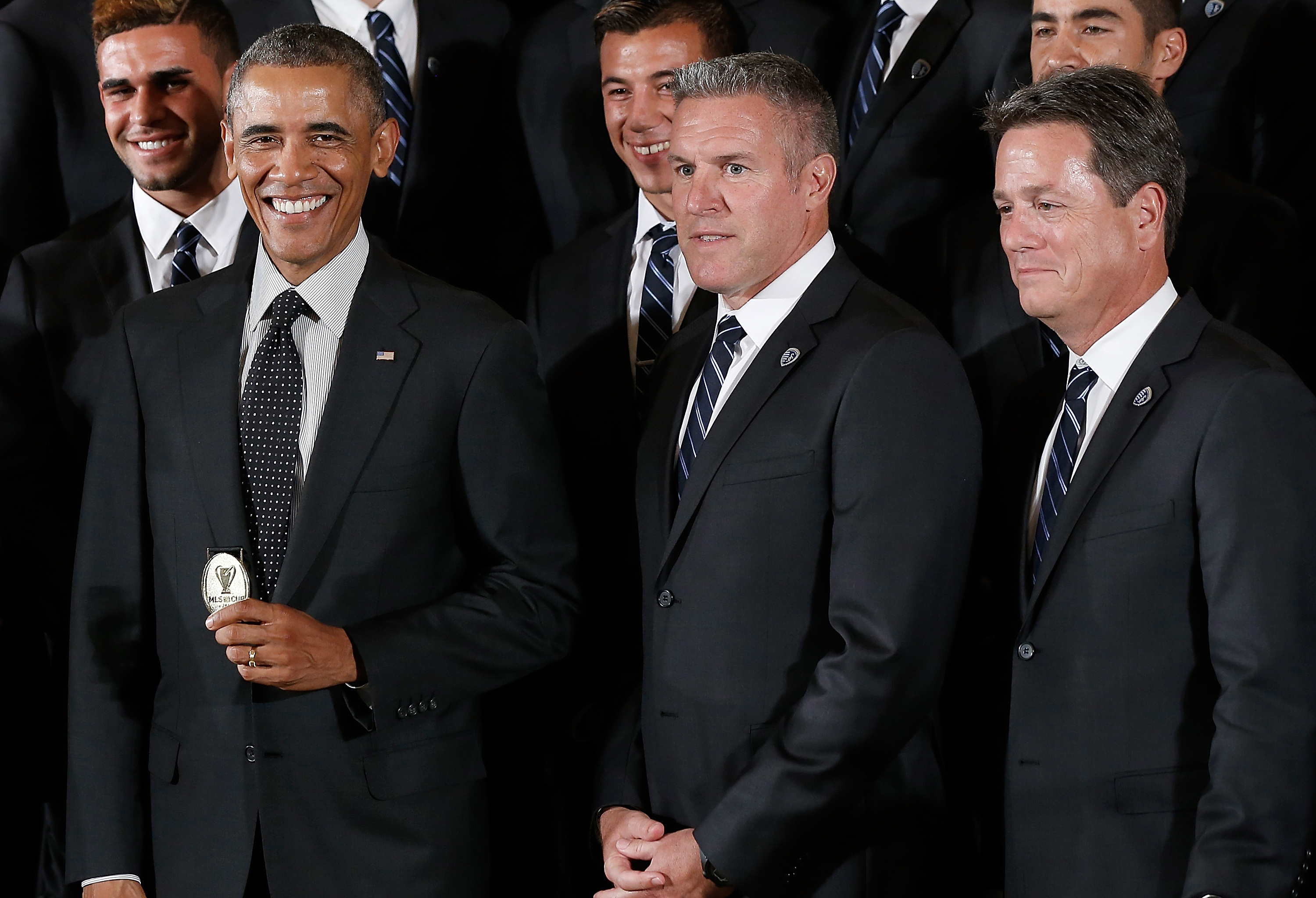 WASHINGTON, DC – OCTOBER 01: U.S. President Barack Obama (L) poses for a photo with a medal given to him by Sporting Kansas City Manager Peter Vermes (C) during an event in the East Room of the White House October 1, 2014 in Washington, DC. Obama honored the soccer team for their 2013 MLS Cup Championship. (Photo by Win McNamee/Getty Images)

“To expect those guys to be in top form at a January camp — and I mean this — I think it’s utterly ridiculous. [I] totally disagree with [Klinsmann’s] comment[s]. I have a lot of respect for Jurgen. Obviously he was a great player, and he’s done tremendous things as a coach, as well. But that doesn’t mean every time someone opens their mouth, they’re right. And I completely disagree.”

As a member of the 1990 USMNT during the World Cup and going off of his experiences, Vermes offered Besler and Graham Zusi a couple weeks off to get away from the game after feeling that “a physical and mental break was required” after he was in the World Cup. Vermes also felt that Zusi’s stress fracture in his foot was a result of not resting and “overused” his foot. Though Vermes didn’t cite this, Besler’s hamstring issues since the World Cup can also be due to overuse. Both Zusi and Besler decided in July not to take Vermes’ offer and take a break after the World Cup.

It’s great that Klinsmann wants these players to be healthy but as I have said before, there are consequences to doing too much. It’s also not beneficial to only value fitness and potentially neglect other important facets of building a great team, like tactical awareness. I can make the argument that the top American soccer players are on par with many of the top world players when it comes to fitness, it’s tactics that the US falls behind on. By Klinsmann’s logic, he can win the World Cup with 23 marathon runners and Tour de France cyclists.

Even if Klinsmann is right and the players need to be more fit to succeed, he’s losing the narrative. He obviously doesn’t care what you, or I, or any USMNT outsider thinks, and that’s okay. But if players like Besler and Wil Trapp, who said that he “never had a direct conversation” with Klinsmann about where to play in his first USMNT game and Philipp Lahm who said, “We were only working on our fitness in training. He didn’t care much for tactical stuff,” that is a problem because Klinsmann should care about what his players say and get these communication issues taken care of.

Klinsmann is a manager, he’s much more than a fitness coach. He has way more responsibilities to the team than monitoring player fitness. The players will be fit when the time comes, Klinsmann should worry about getting them to utilize that fitness for success rather than allegedly throwing a 22 year old out there in his first international game, out of position, and have him figure things out on the fly. That’s just irresponsible on Klinsmann’s part as the manager of the USMNT.