Middlesbrough easily made their way to the playoff championship final in Wembley by beating Brentford by a score of 3-0 at the Riverside Stadium. They will take on the winner of Ipswich Town and Norwich City, who will play their deciding playoff game tomorrow morning (for viewers in the United States).

Boro managed to beat Brentford 2-1 last week at Griffin Park, with goals from Jelle Vossen and Fernando Amorebieta, and knew they would have the home advantage coming into this game and they made great on taking care of business at home. Meanwhile, Brentford knew that this game was going to be an uphill climb as they needed two goals and to keep Boro off the scoresheet.

The first minutes of the game were a bit nervy but finally in the 23rd minute, Lee Tomlin increased the aggregate score for Middlesbrough when he blasted a shot from outside the box that took a deflection and found the back of the net for the 1-0 lead. Middlesbrough would play a rough physical game that would earn them two yellow cards before the end of the half.  The first half would end without further scoring and with Brentford looking for a miracle to occur at the Riverside. 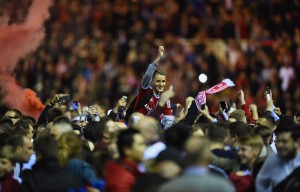 MIDDLESBROUGH, ENGLAND – MAY 15: Middlesbrough fans celebrate on the pitch as they reach the final after the Sky Bet Championship Playoff semi final second leg match between Middlesbrough and Brentford at the Riverside Stadium on May 15, 2015 in Middlesbrough, England. Boro won the match 3-0 and 5-1 on aggregate. (Photo by Laurence Griffiths/Getty Images)

The second half would not be so kind to the Bees as in the 55th minute Kike scored what would be the final nail in the coffin for Brentford. After a mix up in the box, Kike found the ball, dribbled past two Brentford defenders and delivered a shot that passed by Brentford goalkeeper David Button and put up the home side 2-0.

This was not enough for Boro as they put up one more for good measure when Albert Adomah scored Middlesbrough’s third of the game and fifth in the two legged series. At the final whistle, the fans in attendance rushed the pitch to celebrate with their heroes as now they sit just one win away from reaching the Premier League. Middlesbrough hasn’t reached the Premier League since being relegated in 2009.

All that aside, we must take a moment to admire and acknowledge Brentford who just last season made the jump from League One to the Championship and now this year they were a win away from having the chance to play for a spot in the Premier League. Very well done and hopefully the Bees can have more success and maybe make the move on up to the Premier League soon.

The Championship playoff final will take place on May 25th in Wembley Stadium in London and will decide the third and final team that will move to the big time, as champions Bournemouth and second place Watford have already secured their spots in the Premier League. Meanwhile, the teams that will join the English Championship next season from the Premier League are Burnley, Queens Park Rangers, and the third spot is yet to be decided as five teams are battling to stay up.