​The 2014 World Cup has come and gone. In terms of staging the event, the whole affair has to be considered a success for Brazil and FIFA, as long as you don’t speak much about the tamped down civil unrest there. A chief concern going into this edition was that the venues wouldn’t be ready, the infrastructure wouldn’t be in place, and that the huge crowds wouldn’t be properly supported. The concerns largely faded throughout July, allowing fans and the media to turn their attention to the pitch action, which was largely enthralling.

2018’s edition will be held in Russia, a country that has hosted both the Summer and Winter Olympics and has had plenty of money thrown at sports during the Soviet era and in the current kleptocratic phase thanks to oil and gas money. The biggest problem we can expect to see in 2018 is getting around the country, as the venues are spread out around the European part of Russia (sorry Kamchatka). The westernmost naval outlet of Kaliningrad is 1600 miles from the easternmost city of Yekaterinburg. The northernmost host city of Saint Petersburg is 1200 miles from the southernmost host city of Sochi. Fans should plan on getting acquainted with Aeroflot’s schedules, or if you’re lucky enough to be centered within the Moscow-St. Petersburg-Nizhny Novgorod triangle, high speed rail.

As large a geographical spread as Russia shows, it’s nothing compared to what the US showcased in 1994. Though the ’94 Cup was a major success that kickstarted soccer appreciation in the States, hosting the event was a bit trying, mostly because the venues were so far away from each other. There was nothing between the two California venues and Dallas. Orlando was the sole Florida venue, and you had to drive up I-95 all the way to DC to find another WC stadium. Like Russia and Brazil, it’s largely a plane-driven event. While fans have gotten used to that, there’s something about the host country being compact and allowing fans to use ground transportation in a more leisurely manner.

1994 was at the cusp the huge stadium-building boom that hit all 4 major pro sports leagues in North America. As a result of the boom, the US is better situated than ever to host a future World Cup. 4 of the 9 venues from 1994 were replaced or no longer exist. The Rose Bowl and Cotton Bowl have undergone improvements that should help their bidding cause, though both still have bench seating that would have to be upgraded. All of the new pro football venues and dozens of college venues host more than 60,000 seats. All of the multipurpose venues east of the Mississippi have been replaced by single-purpose stadia. There are now 50+ venues around the country that can meet most of FIFA’s hosting requirements now and several that are shoo-in’s. However, the issue in the States is not one of quantity, it’s quality. And that starts with the playing surface.

The US’s once unstoppable artificial turf trend has subsided somewhat, with some stadia reverting back to grass and others moving to FieldTurf or similar products. Field Turf is approved for World Cup use, yet for some neither it nor its competitors have ever been used during a World Cup match. In 1994 we had to go to unusual lengths to get grass in artificial turf stadia. Grass was grown under lights in the Silverdome. Sod was laid on top of Astroturf at Giants Stadium. After the World Cup new technologies started to emerge, including FieldTurf and grass “trays” that were used also at Giants Stadium, and later Reliant Stadium (now NRG Stadium) in Houston. FieldTurf may have improved over two decades of use, but it’s still not optimal for soccer. The pitch at Seattle Sounders’ home CenturyLink Field has to be watered down before each half to keep the rubber and sand particles under the turf in place. Even if that were enough to improve playability, the artificial stuff still looks terrible on television, which is probably another unspoken reason why FIFA doesn’t like it.

While those grass and turf technologies have improved and iterated over time, a new alternative has emerged that may trump everything that preceded it. Hybrid grass (by Desso Sports) is regular grass with artificial turf fibers embedded in the surface. After the artificial fibers are implanted in the dirt every 0.8 inches, the field is seeded or sodded normally. As the grass grows its roots intertwine with the 8-inch deep artificial fibers, allowing the grass to anchor more permanently with the surface. Applied properly, the grass should be more impervious to frequent play and the wear and divots that often come with it. Hybrid grass is already being used at most of the Barclays Premier League (EPL) venues including Emirates Stadium, Anfield, and Old Trafford, plus Wembley Stadium. It debuted on the world stage at the 2010 World Cup in South Africa. Adoption in the US has been slower, but hybrid grass is installed at three NFL stadia: Lambeau Field, Lincoln Financial Field, and Sports Authority Field at Mile High. Since the hybrid surface is 97% real grass, it can be mowed just like other grass fields. Unlike FieldTurf or grass trays, hybrid grass lends itself to a fairly permanent installation, meaning it can’t be easily rolled out or dismantled. Some teams and stadium operators prefer to use artificial surfaces because it emphasizes player speed. If any venue outside of California or Florida wants to be on the final group of World Cup stadium sites, they may have to consider a hybrid grass installation.

The size of the pitch will be at issue as well. An American Football field is 53.3 yards wide by 120 yards long, with 10-20 yards of apron around it. That’s much narrower than the FIFA standard pitch, which is also 120 yards long but 75 yards wide. Newer NFL stadia have been designed to become narrower at the end zones, which makes fitting in a FIFA-compliant pitch difficult. Even the 49ers’ new Levi’s Stadium would require cutting out corners to fit a 120×75 pitch. The Rose Bowl is distinctive for having those corners cut out long ago.

Speaking of the Rose Bowl, it merits a place in the World Cup venue rotation. The summer weather there is unbeatable. Even without a roof it’s virtually guaranteed never to rain. It’s one of the largest stadiums in America, which makes it a qualifier for either the opening match or the final. Yet all of the seats in the ends are bleachers, making a retrofit a very likely possibility. Like with other venues, any changes will have to some sort of value proposition. Does four or six World Cup matches justify the cost of making a few World Cup-friendly changes? That’s for the stadium operators to decide.

And boy, there are many stadium operators. 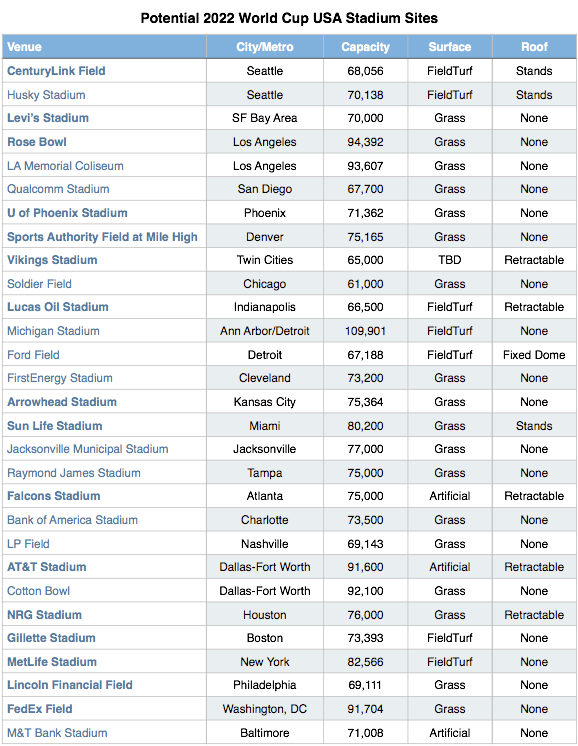 There are so many potential World Cup sites that inevitably some good city/stadium will be left out. America’s 2022 World Cup bid, which lost out to a well-funded Qatar and a well-greased FIFA, went through three stages of venues elimination before the bid was submitted. All in all, 21 venues made the final cut. That list could in theory be cut even further. While it’s not likely that USSF would go for a fully regional presentation, they could easily choose more than a dozen venues and cluster them to make group play a little more accessible. That wasn’t possible in Brazil or South Africa due to the lack of modern facilities. It’s entirely possible in the US. An easy way to organize it would be to pattern the hosting clusters after what the NCAA does for the annual basketball tournaments. Create four regions (East, South, Midwest, West) and structure them for group and knockout play.

Moreover, a good way to think about the World Cup is that it’s composed of 64 games (63 if the consolation game is eliminated). 64 is divided by 16 perfectly, allowing for 4 games at each venue. Since each group has 6 round-robin matches, allow each venue to have 3 group matches and 1 in the knockout phase. Or take 2 groups and divide the 12 group matches among 3 smaller venues that are fairly close to one another. The knockout matches would go to the larger stadia (75,000 or higher capacity). Some venues may be greedy and demand more than 4 matches. In the spirit of equity, I’d hope they didn’t. There’s plenty of prestige and limelight afforded by simply being a World Cup host for 4 games.

The table above shows most of the considered venues, with hypothetically approved locations in bold. Some of the stadia are under construction or in planning stages, such as the Vikings’ and Falcons’ facilities. They are grouped regionally, which should allow for clustering and highlight at least one venue for the knockout rounds.

Obviously there are some tough choices. The only Florida stadium chosen is Sun Life Stadium, primarily because a partial roof is being built there for a future Super Bowl. The other Florida stadia don’t have that. The Cotton Bowl also doesn’t have a roof, nor do many other American football stadia. It’s up to FIFA to determine how important the roof is, though regional climate should play a huge part.

FIFA has taken a lot of heat (no pun intended) over the happenings in Qatar, from the country’s use of slave labor to the possible rescheduling of the World Cup to November or December to mitigate the blistering desert sun. If FIFA comes to its senses and strips Qatar of the games, the US should be fully prepared to take over, even if USSF President Sunil Gulati denies any efforts to do so. Should 2022 stay with Qatar, the US is in as good a place as it ever has been to host 2026 or beyond. Virtually no infrastructure will have to be built, and relatively minor modifications need to be made to existing stadia. American fans have already shown themselves to be voracious consumers of soccer, having bought the largest number of tickets for 2014. The time is coming soon for North America to host again. There is only one country in North America truly ready to make it happen. #Murica

Rhamesis Muncada is a contributor to Bloguin, specializing in Stadium Development and Sports Economics. He has written regularly at Newballpark.org since 2005. He is an itinerant West Coaster