With the news of Sepp Blatter’s resignation, many people in the West applauded the president’s ouster as many felt he was the main cause behind all the corruption in FIFA.

However, not all are happy with the president calling it quits as the governments of Qatar and Russia have spoken out against the pressure the United States has placed on FIFA. Now with Blatter gone, the FBI joining the Swiss officials in their investigations on the possibility of the 2018 and 2022 World Cup bids being corrupted.

The former Prime Minister of Qatar, Sheikh Hamad bin Jassim bin Jaber al-Thani, has gone on record speaking out about how this all escalated because of predujice against Islamic countries.

“See how they don’t talk about Russia with Qatar,” Sheikh al-Thani told Fox News yesterday. “We support of course Russia, to have their turn in 2018. But we see the talk . . . is all about Qatar, because it comes to a small, Arab, Islamic country. That’s how people feel.”

Another high ranking Qatari official also spoke out about the recent FBI investigations of the 2018 and 2022 World Cup bids.

Qatar’s Foreign Minister Khaled al-Attiyah said to Reuters, “It is very difficult for some to digest that an Arab Islamic country has this tournament, as if this right can’t be for an Arab state,” and added, “I believe it is because of prejudice and racism that we have this bashing campaign against Qatar.”

This statement comes amid allegations of worker’s rights violations, several deaths of the workers that are building the stadiums for the World Cup, and the slave-like conditions they have to endure.

Several reports have stated that more than 1,000 workers have died in constructing these stadiums, and the Qatari government has gone on record saying that no worker has died in World Cup construction sites.

Vladimir Putin, President of Russia who is hosting the 2018 World Cup, has been vocal since the corruption investigation started and has not been afraid to bash the United States due to their part in scrutiny of FIFA. 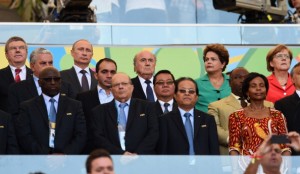 “If anything happened, it did not happen on U.S. territory and the United states has nothing to do with it,” Putin said. “This is yet another blatant attempt [by the United States] to extend its jurisdiction to other states.”

Putin also mentioned the fact that the United States are requesting the extradition of the arrested officials of FIFA to the U.S. and said that the American government achieves their “selfish aims” by “illegally persecuting” people.

Russian journalist Vladimir Soloviev chimed in as well saying on Twitter, “They forced Blatter out. Forced him out. The old man has resigned. The World Cup 2018 in Russia is under threat.”

However, even with all these allegations and the FBI joining the Swiss officials of the World Cup bids, both Russia and Qatar seem confident of keeping the bids.

“No way Qatar can be stripped (of it).” said al-Attiyah. “We are confident of the procedures and deserve to win it because we presented the best file (bid).” Russian deputy prime minister Arkady Dvorkovich stated, “It’s not about Russia or Qatar, it’s about respect to football players… Any political interference into football affairs is illegal. Our preparations are going very well, much better than in some other World Cup countries.”