Soccer jerseys are a funny thing for the American sports fan to comprehend.  Every year there are little tweaks, changes, and alterations with the intent of having fans go out and buy the newest kit.  While there is much tradition in the home kits of everyone from Liverpool to Leicester, the away jerseys and alternate third strips often change wildly every year.

That constant change means there are a lot of jerseys to choose from if you want to try to make a fashion statement as a trendy EPL fan.  But beware, because those statements can either be tres chic or worthy of being covered with a burlap sack. The Saints make the countdown for the sole reason of returning to the team’s traditional red and white stripes after donning an all red shirt last year.  That led to near riots.  “The Stripes Are Back” roughly translates to “PLEASE FORGIVE US FOR GETTING IT HORRIBLY WRONG LAST YEAR!!!”

As we said in yesterday’s list, sponsorship logos can either make or break your EPL jersey.  You may not have heard of Leicester City, nor even know where it is in England, but walking around with KING POWER on your shirt has to give you an immediate boost of confidence.

Yellow is THE color for away jerseys this year in the Premier League and none do it better than Arsenal with this classic, understated look.  You better be in good shape to wear it though, because the promotional posters make it look like an awfully tight fit. 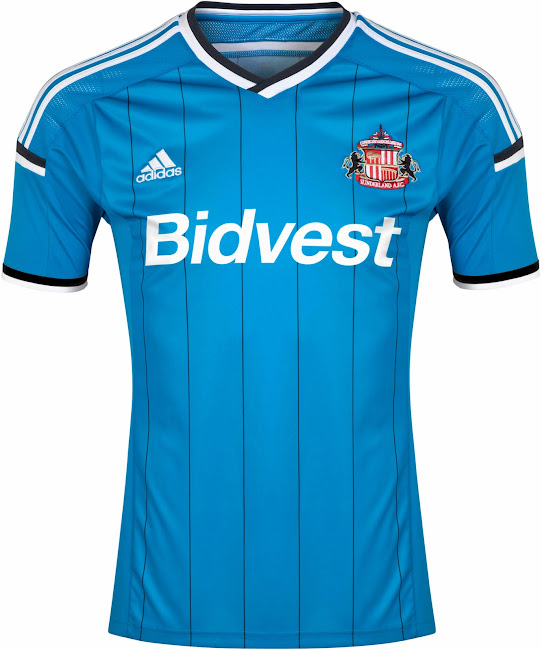 Yellow is in and so are pinstripes.  As you’ll see later in the countdown, a number of EPL teams have chosen to go the route of the New York Yankees for this season to pretty decent success.  Sunderland’s choice of teal for their away jersey also makes it stand out from the pack.

It’s tough to reinvent the wheel every year with home jerseys because either you make a change that betrays a club’s rich history, or there’s nothing there to delineate it from past efforts to get people to buy them.  Chelsea always seems to strike that delicate balance and get it right with the very feint gradients.

The Londoners are the only EPL club without a main sponsor adorning their jersey.  While that’s unfortunate for the club, it’s great for the supporters who don’t have to go around and look like a human advertisement.  The retro look and the classic colors make this a great under-the-radar choice for new EPL fans.

The Chang sponsorship is my favorite current logo on an EPL jersey.  The more elephants, the better, like I always say.  Their choice of an all-black away kit is splendid and a great contrast from their home blue.

Like Chelsea’s home kit, the gradients of blue here are a very classy, yet modern looking touch.  The champions have the best overall selection of jerseys in the EPL this season and it says it all that the classic sky blue home kit didn’t make the countdown while the away jersey did. 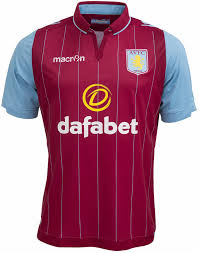 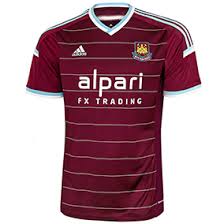 Yes, this is an easy cop-out.  But is there any better color combination for a soccer jersey than claret and blue?  (Sorry Burnley, you were the latest to the party, so you don’t make the list.)  Both go with the pinstripe look this year, and at least we can tell the difference since Aston Villa goes vertical while West Ham goes horizontal.  Both look very sharp.

But just who had the claret and blue first?

That honor goes to Aston Villa, but the story of how West Ham came to own the claret and blue is one of soccer’s great mythical tales.  As legend has it, back in 1899 a man named William Dove beat four Aston Villa players in a sprint and won the team’s kits in a wager.  He then provided the claret and blue to Thames Ironworks, now West Ham United.