As the Champions League narrowed itself from 16 to eight teams this week there were a lot of potentially mouth-watering matchups ahead. When the draw was finally done on Friday morning, we were treated to some of the best matchups anyone could’ve dreamed up.

Headlining the quarterfinal draw will be reigning cup holders Real Madrid taking on cross-town rival Atletico Madrid. It will be a rematch of the two clubs who squared off last season in the final and easily the most bitter of the four matchups we’ll see in the coming weeks.

Last season’s final was epic, with Real Madrid needing extra time to hoist the cup in Lisbon. Both teams blazed their way to the final last season, but have taken different paths to the quarterfinals this year.

Real Madrid barely got past a Schalke 04 side that gave Los Blancos everything they could handle, while Atletico needed a horrible miss from Bayer Leverkusen in the last of the penalty shootout on Tuesday to advance.

Also high on the list is a star-studded tie between PSG and Barcelona.

Those two sides knocked out English competition on the way to the quarterfinals, with PSG knocking off current EPL leaders Chelsea and Barcelona taking down Manchester City to advance to another quarterfinal in this competition. 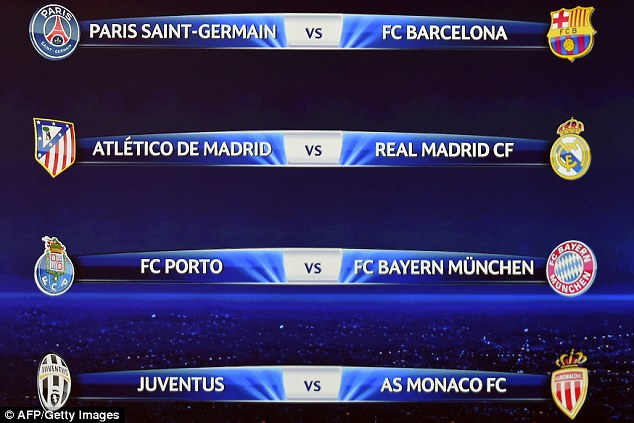 We won’t see Zlatan Ibrahimovic in the first matchup, as he’ll still be serving a suspension for his straight (and controversial) red card in the first leg against Chelsea. He’ll get a chance to take it to the club he played for up until 2011 in a return leg at the Camp Nou though, so you can bet it will be a highly charged affair.

German giants Bayern Munich will clash with Portuguese side Porto, while potential spoilers Monaco and Juventus will also clash to round out the quarterfinal draw.

While most of the attention has been on the Spanish and German sides, Juventus dumped in-form Borussia Dortmund in rather emphatic fashion during their round of 16 tie and could be the most dangerous team moving forward thanks to the draw it just got.