Throughout the World Cup, we at 32 Flags will be giving you a complete recap of the action at the end of the day in our World Cup Roundup.  Not only will we run down the biggest winners and losers, but the highlights and most talked about moments of each day and a look ahead to tomorrow.  Although there was only one match on the opening day of the World Cup, it still gave us plenty to talk about…

1) Biggest Winner: Brazil (and their fans)

– Throughout the second half, you could feel the millions of people across Brazil holding their breath.  In fairness, with the score tied at 1-1, Croatia looked just as likely to hit the front with a second goal.  However, a soft penalty and a cheeky Oscar goal saw the host nation over the line as 3-1 winners.  Had Brazil drew or lost the game against Croatia, a national day of mourning may have followed.  The Brazilians have not lost a competitive game on their home turf since 1975!  Had they drawn or lost, the knives would have been out early towards Big Phil Scolari and his squad, which was uncharacteristically dull and flat for large stretches.  The final score will greatly flatter Brazil, perhaps papering over some deficiencies in the side, such as their inconsistency, shaky defense, and a goalkeeper on the downside of his career.  However, the strength and will of the Brazilian fans may actually be the most dominant force in the tournament… especially their influence on match officials. (More on that later!)

Wearing the #10 shirt for the Brazilian National Team is a weight unlike any in all of global sport.  Pele.  Zico.  Rivelino.  Rivaldo.  Ronaldinho.  The greatest players in the history of the greatest entity in world football.  Into that lofty perch steps Neymar, the Barcleona man who certainly has shown the ability to justify his quick ascension in the game.  When Neymar left the pitch late in the second half, he had scored twice, even if neither was a masterpiece.  To put Neymar’s performance in perspective, look at the other best players in the world and their World Cup history.  Lionel Messi, Neymar’s Barcelona teammate, has one goal… in his World Cup career.  Neymar’s performance in his first World Cup game equalled the goal scoring efforts of Portugal’s Cristiano Ronaldo in two World Cups.  Truly, the fact Neymar was able to pick up a brace while far short of his scintillating best is a warning sign for the rest of the tournament. 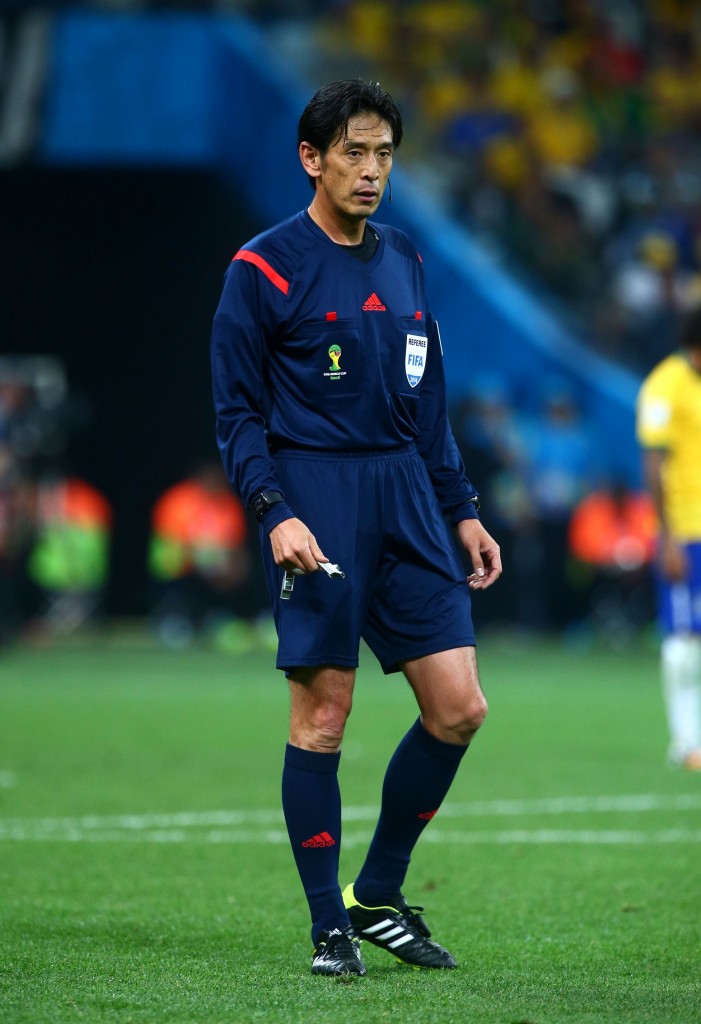 – What other result could be possible after the shocking decision by Japanese referee, Yuchi Nishimura, to award an extremely questionable penalty to Brazil midway through the second half. FIFA has come under much scrutiny, all of it richly deserved, in the buildup to this World Cup.  The continuing embarrassment that is Sepp Blatter, the ongoing controversy over potential bribery involving the 2022 Qatar bid, and the readiness of Brazil to host this year’s World Cup to name a few.  Lost amidst a sea of scandal though, was a report in the New York Times at the end of May detailing match fixing in the buildup to the 2010 World Cup in South Africa.  Now, certainly nobody would be brazen enough to blatantly claim anything nefarious about this year’s World Cup, at least not yet.  But, a marker has now been laid that will surely see the officiating throughout the World Cup, especially matches involving the home nation, scrutinized carefully.

It's a tight call for Brazil's man of the match between Neymar and the Referee.

Often, World Cup openers can be placed into one of two camps, either cagey affairs where both teams are hesitant to be too ambitious, or coronations of the home nation as the tournament gets underway.  Certainly, the vast majority went into the match thinking the latter would prevail and Brazil would run roughshod over the Croatian bystanders.  But, give huge credit to coach Niko Kovac (a former national team captain) and his Croatia side for accepting the challenge in front of them and taking the game on from the opening whistle.   From the beginning, Kovac named an attacking side and refused to park the bus as many other managers would have, cough Special One, cough.

The result was a fascinating match that was much more open, and balanced, than most neutrals would have imagined going into the opener.  Having said all of that one could rightly argue that Croatia, had they taken their chances and gotten a break or two, could have easily picked up a point or more and established themselves as co-favorites to advance out of the group.

Usually the opening/closing ceremonies of an event like the World Cup are a total afterthought.  For the most part, nothing in Sao Paulo would change that point of view, except for one small, yet fascinating moment.  A Brazilian paraplegic actually made the ceremonial first kick of the World Cup wearing a scientifically engineered exoskeleton.  The video below goes into more detail, but it was a very cool moment to see, especially considering it could just as easily been Sepp Blatter yet again recreating a Mr. Burns moment.  The one down side – the opening kick wasn’t aimed at Pitbull.

The star midfielder used his pace to split the Croatian defense and toe poke a shot into the bottom corner to seal a 3-1 victory for the host nation.

-The opening day of coverage proved that this experience will be a bittersweet one for soccer fans in the U.S. once we say goodbye to ESPN’s fantastic coverage.  From the professionalism of Mike Tirico, to the expert analysis of Roberto Martinez, the perspective of Gilberto Silva, everything about the pregame set the stage for the opening telecast, expertly handled by Ian Darke and Steve McManaman.

Of course, it will be worth monitoring how ESPN continues to cover the unrest in the country as the tournament progresses, and it was mentioned at times.  But, will the emphasis on events off the pitch grow if upheaval and protests continue?  During the 90 minutes, it was clear ESPN was focused on events on the pitch, which is probably the correct call at the given moment.  Overall, there wasn’t a single sign that ESPN’s coverage at this World Cup wouldn’t surpass the lofty standards set four years ago in South Africa.

-An intriguing matchup to round out Group A will see the Mexicans, despite the turmoil they faced during qualification, slight favorites over their African counterparts.  The horrifying injury to Luis Montes in a friendly against Ecuador right before the tournament was a cruel blow to the El Tri attack.  However, under Miguel Herrera, Mexico have been slowly finding their way back from the brink.  Meanwhile, Cameroon has recently been in turmoil with a dispute between their players and management over pay.  The fading star of Samuel Eto’o likely won’t be enough with both teams looking for 3 points.

-Undoubtedly, the match of the group stage is a rematch of the 2010 final.  Spain will be looking to redeem their most recent performance in Brazil, where they were mopped up in the final of the Confederations Cup.  Meanwhile, the Dutch will also be looking for redemption from when they came minutes away from penalty kicks and potential glory four years ago.  Both teams feature aging midfields, but the experience of Spain’s back line and the inclusion of a potentially healthy Diego Costa should be enough for the defending champs.

-The question isn’t will Chile win, it’s by how many goals will they win.  In a group that also contains Spain and the Dutch, the Aussies will unfortunately serve as whipping boys sure to pick up the wooden spoon.  Sadly for the Socceroos, each of the other teams in the group will be looking to pad their goal differential against a team who is likely not to pick up any points.  The Chilean attack, led by the dynamic Alexis Sanchez, will be running rampant, laying down a marker for Spain and the Dutch to match.