I’m writing this about 10 minutes after the Portugal equalizer and already had multiple paragraphs written celebrating US soccer and advancement from the Group of Death. Multiple paragraphs with award winning level writing. Then Ronaldo took off down the right wing and everything came crashing down at the hands of Varela’s header and the delete button on my laptop.

Since all those words will never see the light of day we’ll give Belgium the title of Biggest Winner for today. After a second underwhelming victory they are on to the Round of 16 and could meet the United States if the Americans finish second in the group (which looks the most likely scenario at this point.)

The 19 year old striker came on for Romelu Lukaku in the 57th minute and cemented his place in Belgian football history after scoring the winner in the 88th minute. Origi became the youngest Belgian ever to score in a World Cup as he finished off a wonderful Eden Hazard run. The one time, top shelf finish was made to look so easy.

Seriously, what is this? 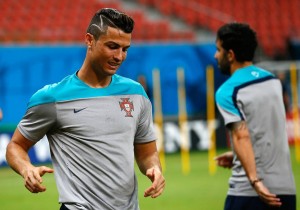 Do you walk into a barber and ask for the Zorro? Ronaldo is hated by many and he became public enemy number 1 in America today even before his game tying assist. Consider this me piling on and trying to forget that goal.

"Hey Jogi, Jurgen. How's the family? Listen, about Thursday. We let Klose get the record, you let Clint get another and that's that. Yeah?"

Most American soccer fans remember Algeria as the team that Landon Donovan scored “that goal” against. While they went out weakly in 2010, the North African nation has come to play in Brazil. Today they put three goals past Korea Republic in the first half on the way to a 4-2 win.

The Korean goalkeeper had an awful match but two of those Algerian goals in the first half were beautiful soccer. The long ball that led to Slimani’s goal was world class. Slimani’s quick touch and the sweeping finish from Djabou was also a quality finish. The Algerians now have to take on Belgium and get a good result to advance. Belgium could rest starters, so “Cinderella” may get to dance a little longer.

Kokorin is an up and coming star for Russia but missing a free header with a chance to take a lead against Belgium definitely qualifies for Worst Moment.

How on earth did Kokorin miss this? Gutted for the 19% of fantasy leaguers who have him in their teams. https://t.co/VYYlr1COdm #BELRUS

The German born American midfielder took a page out of Messi’s playbook with a golazo from outside of the box to equalize for the United States in the second half.

The goal from Varela was a gut punch, or a punch to a lower area, for all USMNT fans and denied qualification to the Round of 16. However, all is not lost. A win against Germany and the US wins the group. While that may be a long-shot, a draw would also see the Americans advance. German coach Joachim Low was once a coach on Jurgen Klinsmann’s staff so a draw that benefits both countries could be a nice “coincidence”.

The defending champions are left to play for pride here as both of these nations have already been eliminated for the tournament. Australian talisman Tim Cahill is out due to suspension and we are all robbed of seeing him play one last time in a World Cup.

Both teams are through but winning the group and possibly avoiding Brazil is at stake. The Dutch win the group with a draw while Chile will have to win in Sao Paulo to take first in Group B.

The game of the day sees both teams looking to advance. With Brazil likely beating Cameroon, Croatia will need to win to advance from Group A. After struggling mightily to even qualify for Brazil the Mexicans can advance with a win or a draw.

Brazil has been a bit underwhelming so far on home soil but this match could turn into a big party. Cameroon has been bad and are already eliminated. A big Brazilian win will elicit parties throughout the country and see the home nation win Group A.

Managing editor and Houston Dynamo writer for Total-MLS. Fan of all Houston sports teams and Manchester United supporter. Still angry at Bud Selig for moving the Astros to the American League.