Home continent teams always seem to have an advantage at the World Cup and so far South American sides are 7-2-1, collecting 22 out of a possible 30 points so far!  It’s not just Brazil and Argentina that are carrying the CONMEBOL flag.  At the moment it’s looking like at least a quarter of the knockout round may come from South America.

Who else?  The Uruguayan striker returned to the starting eleven against England and produced the two winning goals for his country.  It had to be so sweet for Suarez to defeat England almost single-handedly after the roller coaster ride he’s experienced playing in the Premier League.

As uninspired as Uruguay looked against Costa Rica, Suarez’s saving strikes looks to have rejuvenated the entire team.  There’s still a lot left to play for in Group D, but a result against Italy and a berth in the knockout round could mean anything is possible now that their talisman is back.  If Suarez keeps playing like the best striker in the world, anything is possible with this team.  On the other hand…

3) Biggest Loser – England… what else is new?

… another tournament, and another major disappointment for England.  I suppose all that pessimism exists about English hopes for good reason!  The amazing thing about England’s performance in 2014 is that it hasn’t really been that bad.  Wayne Rooney finally got his first World Cup goal today.  Youngsters like Raheem Sterling and Daniel Sturridge impressed in spots. And while the defense allowed a few in at the back, it wasn’t the disaster some expected.  It’s just that once again, in a major tourney, England couldn’t put it all together.  Has any international side over the last 15 years promised so much and yet delivered so little?  It’s unfortunate for a great player like captain Steven Gerrard that his legacy at the international level will be defined by disappointment.  England will likely go home in the group stage, unless they get a little help from Italy to keep their faint hopes alive. 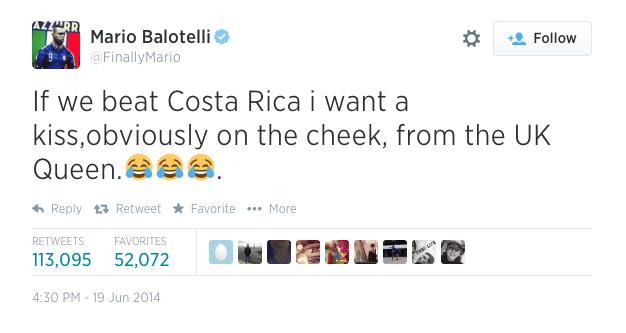 Greece could have been knocked down to 7 men in the nightcap against Japan and it still would have been a 0-0 draw.  Is there any team that is better built to put numbers behind the ball and defend like their lives depend upon it like the Greeks?  Heck, that’s what they do when they have 11 guys playing!  You could have etched this scoreline in before the game even started.  In a tournament filled with exciting goals and games, these two teams produced one of the few snoozers in Brazil.  Because of that lack of ability to score goals, it’s unlikely either will advance.

Young Colombian substitute Juan Quintero was the most exciting player today.  Every touch produced a huge cheer from the pro-Colombia crowd as his second half performance electrified the stadium.  Not only did Quintero produce the winning goal, he produced the attempt of the tournament with this incredible halfway effort that almost snuck in…

A piece of brilliance from the Ivory Coast winger to weave through the defense, but it wasn’t enough as Colombia held on for the three points…

8) Extra Time – Can Colombia or Uruguay make a deep run?

The two sides we started our roundup with were impressive in different ways today.  Colombia showed they were much deeper than Falcao as James Rodriguez and Quintero starred in victory.  Uruguay showed some much needed fight against England to emerge with 3 points when they were without the ball for the majority of the second half.

Both teams showed today that they have a special quality needed for success in the World Cup.  While Brazil, Argentina, and Chile have gained the plaudits so far, don’t discount the chances of either of these two teams to make a run to the semis.  Uruguay has been there before just four years ago.  Colombia may be playing the best team game of any side in the tournament at the moment.  With that South American home crowd and continent advantage, don’t be surprised if one of these teams ends up going further than expected.

Costa Rica authored what was arguably the surprise result of  this World Cup so far with their victory over Uruguay.  But it wasn’t just that Costa Rica won, it’s how they won, even with Uruguay missing Luis Suarez.  Most knew Costa Rica offered a stingy defense but the real shock was the emergence of young striker Joel Campbell, who was a constant terror.  One would think Italy will pay close attention to Campbell from the start.  Meanwhile, Italy showed their usual tournament form in overcoming England.  And though Andrea Pirlo deservedly receives most of the plaudits, he is surrounded at this World Cup by more offensive talent than the Italian side that made a surprise run to the Euro 2012 final.

These two teams seem well-poised to advance out of their group after opening victories, so both teams may be happy with a draw in this situation.  Although, the Swiss may be more cautious with Honduras waiting in the final group fixture while France will face Ecuador.  It is tough to evaluate France after their annihilation of a short-handed Honduras in their opener.  Still, the sight of Karim Benzema scoring goals had to be a sight for sore eyes for coach Didier Deschamps.  It is amazing what a goal scorer in form can do to change the mentality of a squad, and France looked at their confident best.  The Swiss will provide more resistance certainly, but they don’t seem to have the class to match France if Les Blues choose to take the game on and go for victory.

Really only one of these teams has a chance at moving on to the knockout round, and it isn’t Honduras.  CONCACAF has already given a strong account of themselves with the play of the U.S., Mexico, and Costa Rica.  But, what was clear before the tournament has proven true, Honduras was the weakest side from the region.  An Ecuador side that will still be steaming after their last gasp loss to Switzerland will not show any mercy.