The World Cup meme game has been strong this year.  None more so than in the wake of Luis Suarez trying to take a pound of flesh from the shoulder of Giorgio Chiellini.  The Suarez bite earned him a hefty four month worldwide suspension from FIFA and also made him the butt of jokes and memes around the world.  In fact, people were snapping pictures everywhere of an ironic Suarez advertisement trying to get the mercurial striker to take a bite out of them.  The kids call it “Suarezing.”

But the Suarez bite meme game has officially been won by Chinese manufacturers who are rushing to make their own Luis Suarez bottle openers.  You can see a screengrab of one of them below. 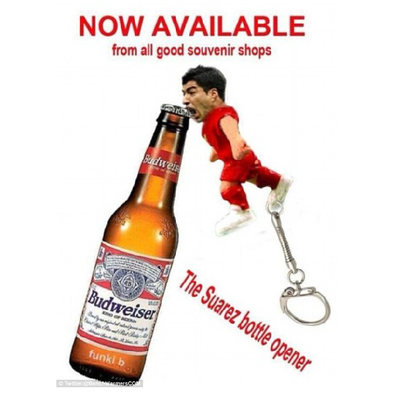 Amazing.  What soccer fan wouldn’t want one of these for their own World Cup party?  Here’s more details from the Wall Street Journal…

Using a Photoshopped image that went viral after the game of Mr. Suarez’s mid-bite visage grafted onto a plastic figurine and preparing to chomp down on a bottle lid, the vendors are selling the openers for as little as 15 yuan ($2.50).

“One mouth, one opener….one bite and it’s open,” read one advertisement.

Given the social media storm that followed the bite, the openers could sell briskly. The problem is, like part of Brazil’s World Cup infrastructure just weeks before the tournament, it doesn’t exist yet.

As cunning in the cut-throat world of Chinese e-commerce as Mr. Suarez is on the field, Taobao vendors contacted by China Real Time gave different motivations for putting up advertisements for the products.

One vendor, who was advertising the openers for an outrageously expensive 9,999 yuan, admitted he didn’t actually expect to sell the product. Instead, he said, he was using Mr. Suarez’s outburst as a marketing opportunity.

“Honestly, I won’t really sell it at that high price even if I have it on hand. It’s just for pleasure,” said the vendor selling under the name Drinchlee. “I was just doing it for entertainment around the World Cup, and you can take a look other stuff that I am selling, such as football teams T-shirts!”

Others were more serious about turning the meme into cash. One vendor with the screen name Lin Mumu0393 said he had received 108 orders and that he was still working with manufacturers to make the product. He said he would have limited supplies in two weeks.

Finally the world has found a constructive use for a soccer playing cannibal.  At least we can say Luis Suarez contributed something to the world society.  How many people are now kicking themselves on the missed marketing opportunities with Mike Tyson bottle openers?