The 2016 MLS All-Star Game marks the first time the MLS All-Stars were not able to defeat a team from London as Arsenal came into San Jose, California and walked away with a 2-1 victory over the all-star squad.

The Arsenal youngsters were able to get on the scoreboard for the Gunners as a late winner by Chuba Akpom was the difference in what was an entertaining last 20 minutes. This breaks a two-game winning streak the MLS All-Stars had over foreign teams as they defeated Bayern Munich in 2014 and Tottenham Hotspur in 2015.

Avaya Stadium was a magnificent scene for the MLS All-Star game as it was a beautiful day in San Jose for a football match. Arsenal, being in preseason form right now, came in determined to gain some form and to gain a victory as well. Theo Walcott said that this game was not a friendly and they came to play.

Arsenal was lucky in the beginning of the game when just 10 minutes into the game, Laurent Ciman (Montreal) took down Joel Campbell in a rash challenge inside the box, which caused the official to call a penalty in favor of Arsenal. It was Campbell who slotted it past the reach of Andre Blake (Philadelphia) for the early 1-0 lead. 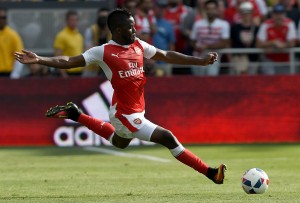 SAN JOSE, CA – JULY 28: Joel Campbell #28 of Arsenal FC kicks the ball up field against the MLS All-Stars during the first half of the AT&T MLS All-Star Game at Avaya Stadium on July 28, 2016 in San Jose, California. (Photo by Thearon W. Henderson/Getty Images)

The Gunners played well as they held on to most of the possession and looked like they were the team in midseason form at some points. However, the MLS All-Stars were able to get their chances on net and it culminated in a chance in stoppage time of the first half.

Sacha Kljestan (Red Bulls) started a great play and directed a pass to Giovani Dos Santos (LA Galaxy) who found Didier Drogba (Montreal) in front. Drogba tried three times, first being denied by Petr Cech, then in front by an Arsenal defender, before finally being able to slot it home for the halftime equalizer.

With the MLS All-Stars making substitutions throughout the game, it was hard for them to develop a rhythm. This was especially true when eight subs came into the game for the MLS All-Stars after the half and both they and Arsenal looked a bit sluggish for 15 minutes where it seemed no one team had the upper hand.

It was until the entrance of the young guns for Arsenal, Gedion Zelalem, Chris Willock, Jeff Adelaide and Chuba Akpom that complemented Granit Xhaka, Alex Iwobi and Callum Chambers who entered at halftime.

But, late in the game it seemed as if the MLS All-Stars were going to pull out a winner when Cyle Larin (Orlando) and Chris Wondolowski (San Jose) combined for a great chance that ended with Wondo skying one just over the crossbar. Just a few minutes after that chance, in the 87th minute, it was Arsenal that was able to find the winner.

Some nifty passing in the box opened up the MLS All-Star defense enough so Nacho Monreal could direct a pass to a wide open Akpom who tapped in the game winner from less than 3 yards out.

With that, the MLS All-Star game came to an end and now the teams will fly out (or some did at halftime) to their respective clubs and Arsenal will continue their North American tour with a game down to Southern California where they will take on Chivas in Carson, California.