The Seattle Sounders have won MLS Cup despite failing to put a shot on goal. The last time they didn’t put a shot on target? July 24th, the last match they played before Sigi Schmid was fired as manager. They lost 3-0 that day to Sporting KC, and barely even attempted a shot.

But the one time they did put a shot on target was in the PK shootout against Toronto FC Saturday night, and they put five of their six spot-kicks into the net. TFC made four of their six, giving Seattle the trophy. Here are a few thoughts on what went down:

Greg Vanney surprised many with a subtle, but important, change to his starting XI. Instead of starting Will Johnson next to Michael Bradley in a 3-4-1-2, he started Jonathan Osorio and slid him higher next to Armando Cooper in a 3-1-4-2, with Bradley as the lone No. 6. TFC had seen problems with this midfield setup in the past — Bradley gets isolated at times — but the fact that Vanney went back to it signaled Toronto’s attacking intent.

It was clear from the beginning that the hosts wanted to press Seattle’s midfield hard to get the ball quickly to Jozy Altidore or Sebastian Giovinco. They wanted service into the box and combination play near the touchline, and they were willing to send as many forward as needed to accomplish this goal.

As a result, Giovinco drew foul after foul and Altidore’s hold-up play became as deadly as ever. Take a look at TFC’s final third passing map in the first half-hour of the game: 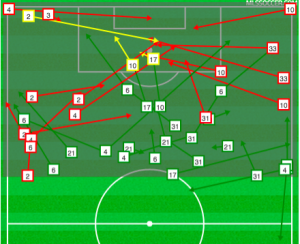 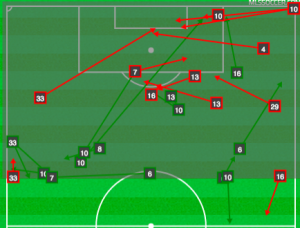 There’s a clear difference between these two maps: Seattle completed almost zero passes in and around the 18-yard box, while TFC were most active in the areas within 30 yards of the goal.

Despite this early pressure, Toronto were unable to break through and were forced to lay off closer to the end of the first half. They became, predictably, exhausted more quickly than the bunkering Sounders.

4. The stars didn’t show for either club

Unquestionably, the two best players in MLS are Giovinco and Nicolas Lodeiro. The fact that they were facing off in the MLS Cup Final was, I’m sure, especially welcome for the league.

Neither of them ever got going, though. Giovinco’s touch just seemed off all game, and while he did draw six fouls, five of his six total shot attempts were blocked. The Italian — who better hope Italian national team manager Gian Piero Ventura was not watching this game — was ineffective.

Eventually, Giovinco came off in extra-time for Tosaint Ricketts (more on him a little later) due to an injury that seemed to have been hampering him for a while. He did ask for the substitution, but he was not pleased about having to come to the bench:

Giovinco shakes Vanney’s hand, then goes bananas, after being subbed off. pic.twitter.com/iGIyh91Cms

Lodeiro had even less of an impact. With Seattle’s passing lanes sufficiently condensed by TFC’s organized press, he got little service and often received the ball in deeper positions than usual. Thus, he was unable to complete his normal amount of penetrating passes and the Sounders attack as a whole was rendered ineffective. Bruce Arena commented before the game to Fox’s Julie Stewart-Binks that the stars had to show up. They didn’t, and that was one of the reasons for the lack of goals. This isn’t to say that other stars didn’t show up. Altidore had his header saved miraculously by Stefan Frei and was the focal point of TFC’s attack; Bradley (aside from his missed penalty) had one of his best games of the season; and Seattle’s Roman Torres and Ozzie Alonso should have been in the running for MOTM.

3. Stefan Frei had the game of a lifetime

I’m not going to pretend to be the expert on MLS history, but many people are saying that Frei’s 108th-minute save on Altidore was the best ever in an MLS Cup Final. If you’re a Sounders fan, watch it on loop. If you’re a TFC fan, turn away:

Frei was the deserved MOTM, and was the big reason for the 0-0 score after 120 minutes of soccer. He remains one of the most underrated keepers in the league.

This is completely subjective. There is no method to this madness. My player ratings:

— Clint Irwin (GK, TFC): 6.0: He didn’t have to make a save until the penalty shootout, when he stuffed Alvaro Fernandez. His distribution wasn’t perfect, so his score evens out at 6.0.

— Justin Morrow (LWB, TFC): 6.5: Morrow didn’t get into the attack enough for TFC, but when he did, he was effective. It was his PK miss that allowed Torres to score the winner, but I’m not taking off for that. I’m not that cruel.

— Eriq Zavaleta (CB, TFC): 7.5: Zavaleta was quietly very good for Toronto, often stopping Jordan Morris in open space. He covered the channels well and his positioning was better than it has been this postseason.

— Steven Beitashour (RWB, TFC): 5.0: Beitashour failed to get on the overlap and was all too quiet for TFC. He was good enough defensively, but got pinned back too often.

Michael Bradley had quite the game before his PK…

He absolutely shut down Lodeiro for 120 minutes. That’s not an easy thing to do.

— Armando Cooper (CM, TFC): 6.0: Cooper played 85 minutes before exiting for Benoit Cheyrou. He got into the final third a couple times, but his performance was mostly uneventful. He did his job.

— Jozy Altidore (ST, TFC): 8.0: Altidore was really, really good. His physicality and hold-up play was effective for Toronto, and he put together the few great scoring opportunities.

— Benoit Cheyrou (CM, TFC): 5.5: Cheyrou didn’t have the same luck coming off the bench as last week, when he scored the winning goal in extra-time against Montreal. He was mostly quiet.

— Stefan Frei (GK, SEA): 9.0: An incredible performance from the Swiss goalkeeper gave his club the win over his former teammates.

— Joevin Jones (LB, SEA): 7.5: Jones didn’t get forward enough, but he put in a valiant defensive effort from his left back position. Credit where credit is due, Jones was great defensively.

— Chad Marshall (CB, SEA): 8.0: Marshall was really, really good. He kept Altidore in check and led a backline that had a world-class match.

— Roman Torres (CB, SEA): 9.0: Torres not only had the winning PK, he also was the best field player on the day. Even more incredible was the fact that he took Giovinco volley to the face early on.

— Tyrone Mears (RB, SEA): 6.5: Mears didn’t have as good a game as the rest of his backline, but he was solid nonetheless.

— Cristian Roldan (CM, SEA): 7.5: Roldan was mobile in midfield, although he didn’t pass the ball as well as he is usually able to.

— Ozzie Alonso (DM, SEA): 9.0: Ozzie really wanted this one, and he got it. He had an incredible game in defensive midfield.

— Nicolas Lodeiro (AM, SEA): 6.5: Lodeiro had a very underwhelming day. Still, he had 108 touches on the ball, the most of anybody on the field.

— Nelson Valdez (ST, SEA): 6.0: Valdez’s 73-minute performance was not great. He checked back well a couple times, but did little to create an attack for Seattle.

— Alvaro Fernandez (CM, SEA): 6.0: Subbing on for Friberg in the second half, Fernandez missed a PK and didn’t do much else.

— Andreas Ivanschitz (RM, SEA): 6.5: A couple of his set piece deliveries could have resulted in goals.

— Brad Evans (CM, SEA): 6.0: Coming on for Morris with 12 minutes left in extra-time, I have no clue what position Evans played. That’s partially because he didn’t do all that much.

1. A few other thoughts