Eight straight hours of MLS playoff action ended with a 3-0 Sounders victory against FC Dallas. All four away teams, and top seeds in the MLS playoffs, failed to score a goal today.

Here’s a rundown of those four games:

The Montreal Impact beat the New York Red Bulls 1-0 at Stade Saputo in the first leg of the Eastern Conference semifinal with Matteo Mancosu’s 61st-minute goal the difference. Montreal sat fairly deep and played a defensive-oriented game, shutting down passing lanes and looking to get their front-three on the run. They were the home team, but more often than not, they looked like the away team.

Mancosu, Ignacio Piatti, and Dominic Oduro were able to get in transition thanks to direct, route 1 play. Piatti would sprint past everybody and then invert and create chances centrally; Mancosu would make crafty diagonal runs to spread out defenders; and Oduro would just blaze past everybody. It was a good formula, and it resulted in this beauty from Mancosu:

Credit also goes to the midfield trio of Patrice Bernier, Hernan Bernadello, and Marco Donadel. They were organized, compact, and they did a very good job of isolating Bradley Wright-Phillips. They also were able to overwhelm Sacha Kljestan and stopped him from being the playmaker and attacking fulcrum that he usually is.

Sacha Kljestan doesn’t have a chance created today. He’s had at least 1 in every game he’s played 90 minutes in this season. #MTLvNY

Forcing the Red Bulls to devote players forward and then beating them on the counter is the best way to defeat them, and the Impact figured that out. We’ll see if they’re able to do that in leg 2 next week.

A 1-0 home win for the Galaxy against the Colorado Rapids in the first leg of the Western Conference semifinal should be considered a solid result. They have a chance to go into Colorado next week and score an away goal that could put the series away. Thus, Giovani dos Santos’ 55th-minute goal — which was helped significantly by an Axel Sjoberg deflection — could end up making a crucial difference.

That goal will primarily be remembered for center back Jelle Van Damme’s overlapping run and subsequent nutmeg of a Colorado defender. But it also was emblematic of the effect that Alan Gordon has on LA’s attack.

The Galaxy need a player up top who is able to play with his back-to-goal, provide an aerial threat, and open up space for creative teammates. Alan Gordon provides that. Robbie Keane does not.

Sebastian Lletget was another big player for LA. Playing in a box-to-box center midfield role, he was really good in possession and was great when advancing the ball forward on the dribble. He took the space given to him and often played like a No. 10.

Colorado, meanwhile, need a player to be the main goal-scoring target. Jermaine Jones should not be that guy.

They’ll need that by next week.

That above headline is cliche and doesn’t exactly show my knowledge on the game, but it’s fitting for a match that was dominating by a persistent and passionate attacking Toronto FC side.

TFC, playing at home against New York City FC, came out with a 2-0 victory after 84 minutes of high-pressing, determined soccer. They wanted a win, and so did their fans; that’s exactly what they got, as Jozy Altidore slammed home a scrap in the box and Tosaint Ricketts pushed in his own rebound to sink NYCFC, who need at least two goals at home next week to salvage this deficit.

We came into this game expecting the Light Blues to try and play out of the back and keep possession, as they always do. But they did not do that, as Toronto pressed high and kept throwing numbers forward, forcing NYC to heave the ball forward more often than not. Plan B for the visitors was to kick the crap out of their opponent, and that’s exactly what they did.

Five of New York’s players ended up with yellow cards, and they finished with just over 350 passes, which is not a lot by their standards. Most of the game was spent in their defensive end, with Jozy Altidore and Sebastian Giovinco playing off of both each other and overlapping fullbacks Steven Beitashour and Justin Morrow. They became Red Bulls-esque with the amount of players they pushed forward, and their second half passing map shows this. 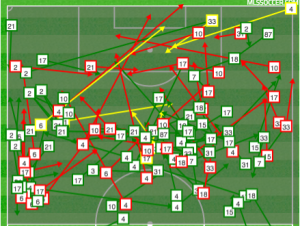 The constant pressure was going to break NYCFC at some point, and it finally did when TFC picked up a couple of goals late on.

It’s worth noting that Andrea Pirlo was out injured with a minor calf ailment. His presence in the starting XI next week (I assume) will help City control the midfield and transition from defense to attack more easily. With Frank Lampard not entering until the 60th-minute, they were unable to do this, especially with Mikey Lopez and Federico Bravo in the starting lineup.

FC Dallas came out in what was mostly a defensive shell, playing a 5-3-2 with three defensive midfielders. They were conservative in midfield and although Kellyn Acosta went forward a couple of times in the first half, they pretty much stuck to their guns and focused on trying to escape with a 0-0 draw.

It worked for the first half. A few Chris Seitz saves and a couple Matt Hedges goal-line clearances kept it scoreless, and the longer that continued, the better Oscar Pareja and FC Dallas felt. But in the 50th-minute, Seitz didn’t come for a Joevin Jones cross and Nelson Valdez headed it into an empty net, and Seattle took a 1-0 lead.

And then the floodgates opened.

Lodeiro got on the end of a low Jordan Morris cross five minutes after Valdez’s score, and then the Argentine No. 10 got on the counter and ran all the way from midfield to the goal, megging Seitz and clinching it for the Sounders.

Seattle played a well-rounded, comprehensive game and fully deserved the convincing victory, even if FCD fans can fill a bit cheated by the cruel mistress that is the MLS Cup playoffs. Morris played on the wing — not the best decision, I might add — and Valdez started after his emotional winner midweek.

Brian Schmetzer played Erik Friberg in the middle and Lodeiro on the wing so as to get him in more unpredictable positions, and to give him more attacking freedom.

FC Dallas will likely abandon the 5-3-2 next week to get more attacking personnel on the field. They’ll have a long way to go if they are going to get that historic treble.