The first leg of the 2016 MLS Eastern Conference confirmed that the Montreal Impact and Toronto FC combine to form one of the best rivalries in the league. Montreal’s incredible atmosphere and the entertaining, competitive match will likely (hopefully) act as a prelude to today’s second leg, which will take place at what is sure to be a raucous BMO Field.

Be sure to tune into Fox Sports 1 at 7:00 et today. It promises to be a spectacular showing for MLS and Canadian soccer.

After a back-and-forth 3-2 Montreal win last week, both clubs have tactical dilemmas that need solving. Here’s a look at what those are and what they can do to answer them:

In addition to being an exciting and electrifying match, last week’s first leg proved to be a vicious tactical battle between Greg Vanney and Mauro Biello. The teams’ three-man midfields were the center-piece of that chess match.

Montreal’s — a stagnant-yet-creative trio of 37-year old Patrice Bernier, 30-year old Hernan Bernadello, and 33-year old Marco Donadel — filled gaps and passed proficiently and penetratingly, fueled by the performance of the ageless Bernier. Toronto’s — a balanced group that plays second fiddle to the strikers in attack and consists of Michael Bradley, Armando Cooper, and Jonathan Osorio — has an average age of 27 and is much more athletic than Montreal’s trio.

Vanney set his midfield in a triangle last week, with Bradley playing behind Osorio and Cooper. This is what it looked like: 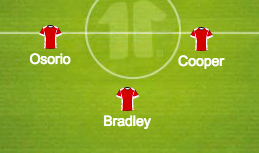 Bernier infiltrated the half-spaces next to Bradley and used those areas to hit balls through to Dominic Oduro and Matteo Mancosu. With Bernier in stepping around Bradley, outside center backs Nick Hagglund and Eriq Zavaleta struggled with the decision whether to step to Bernier or chase the runner, allowing the attacker to run get in behind.

Watch Oduro’s goal for Montreal and focus in on the spot that Bernier (No. 8) is related to Bradley (bald, No. 4) and the indecision from Hagglund (No. 6):

Hagglund doesn’t know where to go, and before he can decide, Oduro is blazing past everybody.

This is all as a result of Vanney’s original tactical setup. With Cooper and Osorio positioned slightly higher, Bradley is isolated and the Impact are able to exploit the resulting space on either side of him. It was huge for Montreal in the first half that Bernier was as open as he so often was and that he was so effective.

It got to the point where Vanney was forced to adjust things. He substituted more defensively-oriented center midfielder Will Johnson in the second half to sit next to Bradley and, eventually, protect the TFC’s attacking trio of Sebastian Giovinco, Jozy Altidore, and Tosaint Ricketts, which we’ll cover in a bit. Johnson’s presence next to Bradley shored things up defensively for Toronto and took the Impact midfield’s space away.

They may not start Johnson, but it seems like a pretty sure bet that Bradley will not be alone at the base of Toronto’s midfield this time. We’ll see if Biello can get his creative players in similar spots, or if Montreal will just bunker and hope for the best.

Vanney’s decision to bring in Will Johnson was not his only major mid-game tactical switch. As an attacking move down 3-0 in the second half, he put speedy striker Tosaint Ricketts on for Osorio and put him next to Altidore up top, with Giovinco moving into a more of a free role as a center attacking midfielder. The change generated two goals and got Toronto back into the series, and now needing a win to advance to the MLS Cup final, we could see Vanney stick with that dynamic attacking trio.

Giovinco is best when allowed to roam, particularly under a true center forward like Altidore. He can pick his opportunities to hit gaps, check back in possession, or smash a long shot from anywhere on the field. In the No. 10 spot (although he is not a true 10) he would have only some of these freedoms; more defensive and creative responsibilities arise when playing in the midfield.

But in Ricketts, TFC have a third real goal-scoring option on the field, something they don’t have when they go with their conventional starting XI. This is a game in which they need to score, to put it simply, and against an Impact team that has shown to be stout in the middle this postseason (Laurent Ciman and Victor Cabrera have been very good), they’ll need all the help they can get.

It’s an interesting question for Vanney to ponder, and it’s one of a few others whose answers will shape the course of this game.