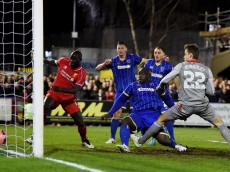 The magic of the FA Cup! Adebayo Akinfenwa, widely known as the biggest man in soccer, is a forward for AFC Wimbledon. He weighs 16 stone, or around 225 pounds and scores goals. He just scored against his favorite team Liverpool and tied it up before halftime in the FA Cup 3rd round. That got […]