Now that the Premier League season is officially at its end, we must, once again, say adieu to three friends whom we have gotten to know throughout the year. Some we have loved, some we have disdained, but all we will sorely miss for many reasons. The three clubs going back to the Championship this year were unsuccessful on the pitch for a variety of reasons (notice they all have English managers, hmm). That said, what went wrong? What needs to change? What will this club look like in the fall as you try to watch them kick a ball on a dodgy internet stream coming from an iPhone inside the stadium? And which one will try to hire Big Sam Allardyce for the quick return? 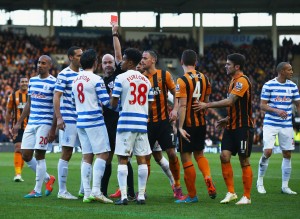 Joey Barton of QPR (8) is shown a red card and is sent off for punching Tom Huddlestone of Hull in the going during a match on February 21, 2015. (Photo by Matthew Lewis/Getty Images)

My goodness was this season dreadful for QPR fans. When Joey Barton is your captain, you know you have some serious trouble and identity problems. The club couldn’t even settle on a manager this year after Harry Redknapp suddenly departed. You had to feel for Chris Ramsey. He was doing his best with a bad hand. Further, this club is in deep trouble looking to the future. Most of the club has been labeled as troublemakers, they spend a ton of money, and most of their players will likely depart for greener pastures. Look for the Championship squad to be completely different than the one that finished last in the Premier League.

Saddest Moment: The utter dissolution of the team in the last ten weeks. I am not one to succumb to narratives about grit and desire, but I’ll make an exception for QPR: this club had no heart. Most QPR stories were about their bad attitude. Unfathomably, the club made Joey Barton captain, the same Joey Barton that keeps hitting opponents in the groin and getting sent off. Two weeks ago, Joey Barton labeled a number of his QPR teammates as “bad eggs,” and coach Chris Ramsay agreed. Just one week ago, Barton got into another Twitter spat, leading the director of football to ban all players from the platform next season.

Brightest Moment: The emergence of Charlie Austin, who scored 17 goals, good for fourth place in the Premier League. But the sad thing is that Austin’s great season likely earned him a spot on a better Premier League club next season. And the even sadder thing is that QPR really need the money to pay off their exorbitant transfer fee debt. 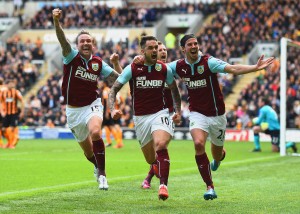 Danny Ings celebrates scoring the opening goal with Matthew Taylor (L) and George Boyd during match with Hull City on May 9, 2015. (Photo by Laurence Griffiths/Getty Images)

I will admit my bias openly. In a season where the title was effectively decided months ago, Burnley were my favorite story this year. The bad news is Burnley were not very good at all this year. But the good news is they spent very little money to be so bad. They will probably lose young striker Danny Ings to a Premier League squad, almost assuredly, but most of the squad will remain intact and well-positioned to make a strong run at promotion in the 2015-16 Championship.

Saddest Moment: Danny Ings, his goal, and a melancholic-yet-exuberant celebration in Week 36. Burnley needed a victory plus many other circumstances to stay alive, but those other circumstances failed to materialize. When Ings scored, the traveling crowd erupted with the joy of a newly promoted squad. I was happy to see these fans get one last chance for a Premier League moment this year.

Brightest Moment: The cultural importance of Dave Fishwick. If you looked closely at Burnley home games, you would notice one of their biggest sponsors is Dave Fishwick’s Minibus Sales. Popular podcast Men in Blazers popularized Dave’s quaint sign, brought him on for an interview, and a footie celebrity was made. God bless you Dave Fishwick, and God bless you Burnley. Come back soon. 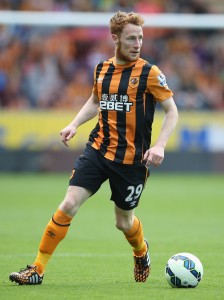 My goodness it all suddenly fell apart for Hull, didn’t it? Still, it’s hard to figure out what exactly went wrong. The squad was bad, no doubt, but it should have been good. Manager Steve Bruce brought in solid players over the past years—Tom Huddlestone, Mohamed Diame, and Abel Hernandez. But all of them wound up either injured or inconsistent, and that doomed the Tigers’ season. It really should have gone better for Bruce’s squad.

Saddest Moment: A tie between an on-pitch and off-pitch moment. On the pitch, it’s now clear that selling Shane Long in January was a huge mistake. Seemed like a good “sell high” moment at the time, but after he left and Jelavic went down hurt, all the goals just disappearance. Off the pitch, a dark moment when Jake Livermore was busted for cocaine, and everyone realized that maybe — just maybe — there are some problems in Hull City that need solving.

Brightest Moment: Another tie between (1) Stephen Quinn’s brilliant beard and (2) those photos of Steve Bruce on his holiday. Tough call.