Yesterday, arguably the greatest US Soccer player ever, Abby Wambach announced her retirement and will play her final game on December 16. Looking back on her career, it became clear that she wasn’t just a soccer player. Yeah, she spent most of her life playing soccer and the title of “soccer player” is an accurate one, but she has used that platform to help influence many things off the field and that legacy will continue long after she is retired from playing soccer.

Abby Wambach does leave the playing part of the game as one of the best and most successful players in US Soccer history. She has a record 184 goals in 252 games as well as a nine time winner of the Algarve Cup, three time CONCACAF Gold Cup champion, 2004 and 2012 Olympic gold medalist and the pinnacle of her career, the 2015 FIFA Women’s World Cup championship. The USWNT has been highly influenced by Wambach over the past 14 years with her goalscoring and tenacity with every minute she was on the field. 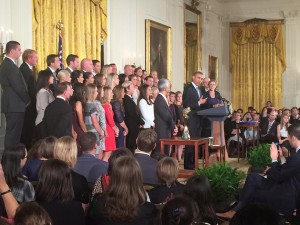 The USWNT being honored by President Obama for winning the Women’s World Cup. 10/27/15

But like I have said before, Wambach has influenced and will continue to influence many things off the field. From being a philanthropist to being a voice for women and gay rights to being a role model for young girls and even boys as someone to look up to when they play soccer, Abby Wambach has done much more than just play soccer.

For instance, Wambach has been a voice on raising awareness for Juvenile Diabetes as well as youth soccer. She has become a champion for women’s rights and gay rights as she has been active in making sure women are being treated similar to men both on and off the soccer field as well as trying to put an end to homophobia and transphobia.

One example of Wambach fighting for equal rights was the fight against artificial turf at the Women’s World Cup. The entire point to Wambach’s complaint about the Women’s World Cup being played on turf wasn’t that it was being played on turf. Turf fields are used in NWSL and while Wambach probably wouldn’t think that was ideal either, she still played on artificial turf. Her point about the turf fields was because FIFA would have replaced artificial turf with grass if it was a World Cup for men. The 1994 World Cup in the United States proved that FIFA was at one time willing to do that and she just wanted things to be equal for women. Things like turf and no turf and the disparity of pay, resources and amenities among her male counterparts has been a microcosm of what can take place in any other workplace. The fight against inequality has been Abby Wambach’s toughest opponent and while she may be retiring from the soccer field, she doesn’t seem to be retiring from this anytime soon. 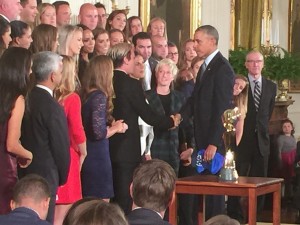 Abby Wambach and President Obama’s shaking hands after his speech about the USWNT in the East Room of the White House.

So it seemed kind of fitting Abby Wambach would announce her retirement the same day after meeting President Obama and Vice President Biden and being honored at the White House. Wambach’s career started during a time when women’s soccer was in relative obscurity. She started playing for the USWNT a year after the United States won the Women’s World Cup and even though though the success from that win started a club league (WUSA), the league soon folded and it was back to square one. Now that her career is coming to an end, Wambach leaves on the highest and strongest platform women’s soccer has ever had. The USWNT won the Women’s World Cup with 25 million people watching and America cheered on a soccer team with 23 athletes. The fact that they were women, was irrelevant and men and women were cheering them on as soccer players, not female soccer players. In addition, The NWSL is going to enter their fourth season next year and are still expanding, which means it has operated longer than any other women’s soccer league.

But even though the women’s side of the game has seen many recent successess and it is as strong as it has ever been, there is still a long way to go. As Abby Wambach ends one stage of her life and enters another stage, she will for sure be doing what she can to play her part in making women’s soccer even stronger than it is now for the girls and women who want to play and for the men and women and boys and girls who cheer them on. That is Abby Wambach’s legacy and that is not ending anytime soon.