It is not even match day three of the English Premier League, far away from the end of the season where three teams from the English Championship will celebrate achieving promotion, but we here at 32 Flags will examine the strength of the teams that have recently been promoted.

First, let us examine the current Championship title holders AFC Bournemouth, or Cherries as they are so affectionately called. This is Bournemouth’s first appearance in the Premier League ever and that fact is evident having lost both games of the season so far. One of their losses could be attributed to bad luck, but you have to be lucky to be good and the Cherries have been neither.

What is worrying about Bournemouth is that after two games in the top division they still haven’t been able to score a goal, being shut out in both of their games so far. They lack creativity in the midfield and players like Andrew Surman and Matt Ritchie really need to step it up. Although, one positive to take away is that they have a solid defense and have only allowed two goals in two games. 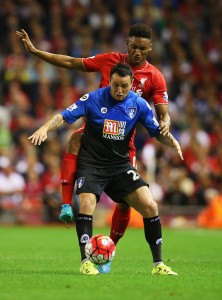 They have not helped out their cause in the transfer department as well as most of their signings have been free transfers and players from the Championship. However, with a few good names such as Artur Boruc from Southampton, Max Gradel from Saint-Étienne, and Sylvain Distin from Everton they showed they can be thrifty while getting some quality talent in the club. But, if they really want to stay up in the top flight they need to be spending more on quality players, instead of relying on talent from the second division.

With this said, Bournemouth has gotten off on the wrong foot and are already in trouble this early in the season. Two consecutive losses and two tough games against West Ham and surprising Leicester City to round up the month will really put the Cherries to the test.

Watford’s first season back in the Premier League comes nearly 10 years after their last stint in the top flight, in which they crashed and burned and were sent back to the Championship the following season.

The big story for Watford was the exit of their manager Slaviša Jokanović, who now manages Maccabi Tel Aviv. It wasn’t surprising that he left considering that Watford had four managers in the span of one season.

Now with Spanish skipper Quique Flores at the helm, the Hornets are hoping that he can bring some stability to Watford. And stability they’ve had so far with two draws to their name in the season.

After an impressive showing at Goodison Park against Everton where Miguel Layún and Odion Ighalo were sure to give the Hornets their first points of the season, Arouna Koné dashed their hopes and they settled for a draw. Their next game was an uninspired nil-nil draw against West Brom.

They need to play more inspired football, but with the talent that they have I really do see them, eventually, making a good run near the middle of the season. I see them saving themselves from the drop by the time the season ends, but it won’t be an easy task.

Unlike their other two counterparts, Watford has made a splash in the transfer market spending over £21,000,000. They have spent that money well as they have landed players like Juanfran from Real Betis, José Holebas from Roma, Étienne Capoue from Spurs, and Matěj Vydra from Udinese.

Recently promoted teams never really do get a break from the schedule makers do they? Watford, in their next four fixtures, have Southampton at home, then they travel to Manchester City, then they host Swansea, before going to St. James’ Park to battle with Newcastle United.

Norwich City is a team that is resilient and has experience, having last played in the Prem in 2013-14, were relegated to the Championship, and after a year’s absence from the top flight they are now right back in it the this season.

So far, the Canaries’ season has been a Jekyll and Hyde story first losing their home opener to Crystal Palace by a score of 3-1, then the following week they beat lowly Sunderland by the same score.

Nathan Redmond has continued his goal scoring streak from the Championship and has scored two goals for Norwich so far. The youngster shows promise and will most likely be Norwich’s most dangerous goal scoring threat. But, with a defense that’s very unpredictable, Norwich fans will have to wait to see which combination of Basssong, Brady, Whittaker, and Martin they get, the one that allows three goals or the one that scores two.

The Canaries’ transfer season hasn’t been filled with much activity either as their only notable signings have been center mid Graham Dorrans from West Brom (£3,000,000) and Robbie Brady that they nabbed from Hull City for £7,000,000. On the other end of the spectrum, they have let go of a lot of players, losing eight members of the squad, most of them defenders as well.

Norwich doesn’t have an easy road ahead of them as well as they round up the month playing Stoke at home before visiting Southampton at the end of the month. They can prove to be tricky fixtures and we will have to see what Norwich is the one that comes out to play, the one that gets thrashed or the one that does the thrashing.