Even people with only a mild interest in the NFL have heard of Patrick Mahomes. The Kansas City Chiefs’ young star quickly made a name for himself once he burst onto the scene because of the quality and creativity that he possesses. Despite being only 26, football experts already think of Mahomes as a future Hall of Famer who may go on to break every NFL record under the sun.

That was, at least, until this season. Having set extremely high standards in the previous years, Mahomes has been a little below his best so far. So what’s going on, and will Mahomes turn things around? Let’s take a look.

Mahomes hasn’t just hit outstanding heights over the past few years. He’s been hitting those heights consistently. But that has been the case this year. While he’s definitely had some notable performances, many errors have crept into his game. He’s thrown an interception in the majority of his games this season. That’s not awful for a quarterback, sure, but Mahomes is no normal quarterback. You don’t become thought of as one of the best ever if you continually throw interceptions.

Of course, a difficult beginning to the season doesn’t necessarily mean the year won’t be successful. The Kansas City Chiefs are still on course to go to the postseason. Indeed, despite Mahomes’ early-season troubles, the team retain outstanding Super Bowl odds; at the time of writing they’re joint-favorites with last year’s winners Tampa Bay Buccaneers to lift the trophy. For that to happen, the Chiefs will need Mahomes to recapture the level of form that prompted the franchise to hand him a ten year, $500 million contract.

Mahomes declining performances may not only be the quarterback’s fault. Other teams have definitely improved their defensive capabilities this year. Mahomes burst onto the scene, and teams struggled to deal with his creativity and athleticism. But eventually, oppositions figure out how to neutralize star players. And that’s what we’re seeing right now. They’ve managed to prevent Mahomes from having a clear pass to his wide receivers. The problem for Mahomes is that once one team has figured out an effective defensive strategy, all the other teams will copy it. To get back to his best, he’ll need to put his creative skills to use and come up with a way to diversify his offensive game.

Trying To Do Too Much

Of course, you can’t just blame the opposition for Mahomes’ troubles. His response to the opposition’s performance has probably also contributed to his struggles. Rather than accept the reality that he has to change his game slightly — even perhaps just on a temporary basis — Mahomes is trying to force through his big passes. He’s trying to be a superhero, essentially. While the Chiefs would love to see long touchdown passes from deep, a different approach is needed if they’re not working. It’s better to make modest gains down the field rather than risk an interception. This is something that Mahomes seems to realize, however. In recent weeks he’s turned down the early pressing, focusing instead on a more patient approach. 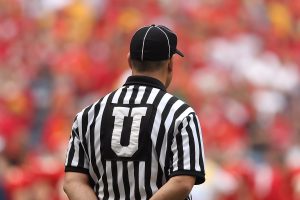 There’s also the chance that Mahomes isn’t in peak condition, perhaps from a physical or mental standout. He’s taken some big hits in recent months, including in last year’s Super Bowl against Tampa Bay. He’s also been dealing with a nagging foot injury. While it may be broadly fine, sometimes it takes longer than people think to overcome these issues. He could also be reeling from his underwhelming Super Bowl performance last February. Before then, Mahomes looked unstoppable. Since then, some of his confidence has gone.

Of course, Mahomes is too good to be underwhelming for too long. He’ll be back. But the Kansas City Chiefs will hope it’s soon. If he is, then a couple more Super Bowl victories will be within reach for Mahomes and the gang.