It’s impossible to argue that Bastian Schweinsteiger’s biggest moment for his country wasn’t lifting the World Cup in 2014. The image of Schweinsteiger heading to the sidelines, blood streaming down his face will not be forgotten anytime soon. In some ways, it’s the indelible image of that final, along with Mario Götze’s goal and Phillip Lahm hoisting the trophy. But for Schweinsteiger, another image just after Germany eventually won is far more fitting when talking about his legacy.

There was a moment just after full-time when Schweinsteiger couldn’t contain his emotions anymore. With Thomas Müller’s arms around him, Schweinsteiger’s face was buried in his hands, tears flowing like the blood was 15 minutes earlier. Schweinsteiger isn’t the greatest German soccer player of all time, but he might have been the most emotional.

After 120 matches, @BSchweinsteiger has retired from #DieMannschaft duty. Thanks for all the unforgettable memories! pic.twitter.com/dziFyjN4KO

Schweinsteiger’s international debut was in 2004 in a friendly against Hungary, he’d go on to play for Germany 120 times, setting a record for most appearances at major tournaments along the way. His arrival in the national team coincided with Germany’s new rebuild. In many ways, Schweinsteiger is the face of that rebuild. At first glance, he’s the prototypical German, hardworking , strong and tough. But more than that he was flamboyant, mostly in his early years when he played more as a winger.

Germans didn’t like flamboyant as much at the time, Schweinsteiger even received a talking to from Chancellor Angela Merkel in 2008 when she told him to “not do the same foolish things” after he was shown a red card in a match against Croatia. Schweinsteiger would eventually become the more stoic senior statesman in the national team, but for a time he was the brash young winger that so many of today’s young German players would become.

Becoming more mature was a sign of progress for Schweinsteiger and the national team. When Louis Van Gaal moved him from a winger to a central midfielder in 2010 it was to the benefit of both Bayern Munich and Germany. 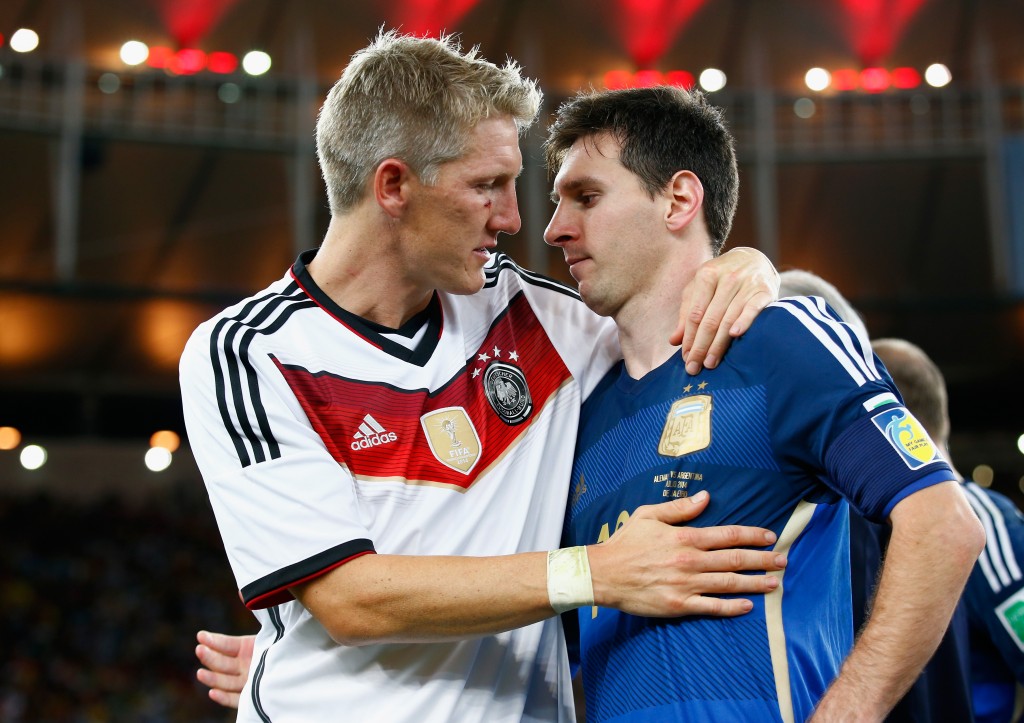 A new position begat new responsibilities for Schweinsteiger. Michael Ballack’s injury shortly before the 2010 World Cup might have given Lahm the captain’s armband but it gave control of the midfield to Schweinsteiger. In South Africa, Germany would impress and so would the freshly converted central midfielder. Schweinsteiger’s play, especially in marking Messi out of the quarterfinals, a feat he would repeat in some respects 4 years later, vaulted his popularity to the top in Germany. But 2010 was not his, nor his countries time. Another loss to the emerging Spanish dynasty would be tough to swallow. In 2008 Spanish players danced around Schweinsteiger after the final in Vienna as he was giving a post-match interview.

Much of Schweinsteiger’s international career was marked with those kinds of so close yet so far finishes. Semi-final losses in 2006, 2010 and 2012 and the loss in the final of 2008 were starting to take their toll on the mentality of the German team. At the center of all these defeats was always Schweinsteiger, head in his hands with tears not far behind. Along with Lahm, Schweinsteiger was at the start of Germany’s most recent golden generation, but unlike the previous generations of Beckenbauer and of Klinsmann, this one had an empty trophy case.

Schweinsteiger never hid his emotions, and always seemed to come back even more determined than before. Losing on penalties against Chelsea in 2012 in Munich was devastating and a month later Germany came up short against Italy in the European Championships. A year later Bayern Munich would win the treble and a year after that Germany would win the World Cup.

What made Schweinsteiger so beloved in Germany, apart from being a very talented player, was his emotion. Fans regularly chanted “Fußballgott” when he played and it wasn’t just because he would help his team win, but because he cared. If Schweinsteiger was the most emotional player to wear a Germany shirt it was because he tried so hard. Dealing with the pressure that he, along with many of his friends, would be viewed a failure without a major trophy took it’s toll on him. You can see it in his face every time he fell just short of what he desired.

Desire is what drove him in 2014. The World cup in Brazil would be his last trip to the game’s most prestigious tournament. In the end, he came out on top, bloodied and beaten he had helped deliver a fourth World Cup for his country. Mark Lawrenson on the BBC broadcast famously said as the full-time whistle blew and Schweinsteiger was on the ground after sacrificing himself once again, “He has given absolutely everything.” At the moment in Brazil, all the near misses and past failure’s were irrelevant.

After the tournament, Lahm would retire from the National team and left the captain’s armband for his friend. Schweinsteiger might not have been the same player anymore, as age seemed to have caught up with him, but as an emotional leader, there was little arguing that he was the right man for the job.

He played a bit part in Germany’s most recent tournament. Schweinsteiger came into the Euros with concerns about his fitness, but his impact was always felt from time to time, like his late goal in the opening match against Ukraine. His departure from the national team now will not leave a hole on the team sheet as Germany have plenty of options, but it’s unlikely that they will find a player who wore his heart on his sleeve quite like Schweinsteiger. There is an emotional void now, that will eventually be filled, but won’t ever be the same.

Germany fell in the semi-final to host France this summer, Schweinsteiger gave away a silly penalty in that game that cost Germany dearly. But after 12 years and 120 caps for the Schwarz und Weiß his mistake would quickly be forgiven. He retired a little more than a month after the match against France, and while he would have rather gone out on top, after all, that’s done and sacrificed for the national team, Germany supporters have little else to say apart from danke.