Abby Wambach recently was interviewed by the New York Times about the upcoming World Cup next month and how she feels going into the tournament.

In this interview, Wambach has controversially stated that her teammates are scared to play the ball in fear of creating turnovers that will lead to goals, and that is why the team relies on her to score when the pressure is high.

On this she said that her teammates, “They’re like: ‘I’m going to pump that ball up to Wambach, see what happens. I don’t want to play this little 5-yard ball, because if I pass it and it gets picked off and we get scored on, then it’s my fault.’ The nerves and stress make people play a little more direct, make them play a little, ‘Let’s just pump the ball in there; this is a safer play.’ And I just make stuff happen.”

But, with Wambach not certain to start every game and her performance dropping against quality contenders for the World Cup such as France, Brazil, and Germany, the question is: Can Abby Wambach still be seen as reliable? Will she come up big when the pressure is on?

The U.S. squad is stacked in the forward position as Alex Morgan, Sydney Leroux, and NWSL leading scorer Christen Press are also going to be relied on to net some goals in for the U.S. Ladies when Wambach is not in the starting eleven. Even when Wambach is on the field, will she have the stamina to play with her younger counterparts?

Abby has impressed so far netting two goals in each of the two pre-World Cup friendlies against Ireland and Mexico, but they are no Brazil, Germany, France, or Canada. The difference in opposition will be evident and it will test Wambach’s ability to keep up with a faster pace that these teams play. 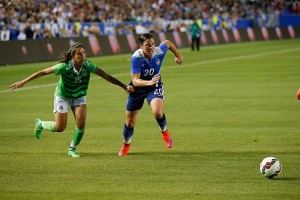 LOS ANGELES, CA – MAY 17: Forward Abby Wambach #20 of USA and Defender Bianca Sierra #15 of Mexico chase after a ball in the second half during their international friendly match at StubHub Center on May 17, 2015 in Los Angeles, California. (Photo by Joe Scarnici/Getty Images)

Wambach also talked about how she is staying in shape despite not playing in the NWSL season this year, and how her sabbatical was seen as controversial in the eyes of many players and coaches that said that she should not have made the squad if she didn’t play in the NWSL.

She addressed this saying that the “risk was too big to take” on playing games right before the World Cup with players that could come in with reckless tackles and the toll that these games would have on her.

Describing herself as a person of “extremes”, she addressed how she has lost around 10 pounds by cutting back on junk food, soda, and alcohol. “I’m obsessive. I can eat really unhealthy for a bit, then eat really well to combat it. That’s who I am. Now, I’m in the really healthy phase”, said Wambach about her eating habits.

Despite not having played a game in the NWSL season, she has been training with her new team the Seattle Reign, after having been traded by the Western New York Flash, and has gotten better at timing headers thanks to Reign coach Laura Harvey.

The USWNT have one more game left in their pre-World Cup tour against South Korea on May 30th that will be played at Red Bull Arena in Harrison, N.J. After that, they will be on their way to Canada to participate in the Women’s World Cup to play their first group stage game against Australia.