Arsenal defeated Aston Villa by a score of 4-0 to win the 2015 FA Cup, in what was a resounding victory for the Gunners as they finish off the season with a trophy.

Wembley Stadium was filled to capacity to watch Aston Villa take on the Gunners, and they would have a tough task ahead of them. Aston Villa nearly avoided relegation in the 2014-15 English Premier League and Arsenal finished comfortably in third place, earning themselves an automatic berth in the Champions League.

For Aston Villa, a championship would have been a welcome distraction from what was a stressful season in which they looked down the grim possibility of relegation to the Championship and saw manager Paul Lambert sacked in February and was replaced by incoming manager Tim Sherwood.

However, this was not to be for Villa as Arsenal looked like the stronger team coming out attacking from the first minute and they had seemed to have great chances in the beginning. 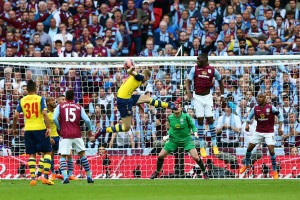 LONDON, ENGLAND – MAY 30: Per Mertesacker (C) of Arsenal scores their third goal during the FA Cup Final between Aston Villa and Arsenal at Wembley Stadium on May 30, 2015 in London, England. (Photo by Paul Gilham/Getty Images)

Finally, right before the halftime break Arsenal broke through with a goal by Theo Walcott. Walcott found a ball that Alexis Sánchez headed towards him, and caught it on the half volley whizzing it by the Villa defense and goalkeeper, Shay Given.

It didn’t take long after the break for Arsenal to find their second of the game and it was a beauty from outside the box. Alexis Sánchez dribbled past three Villa defenders and delivered a rocket that Given had no chance in stopping as it bounced off the bottom of the crossbar and in.

Holding a 2-0 lead, Arsenal also held on to the possession of the game and Villa had virtually little to no chances the rest of the game as Arsenal suffocated the Aston Villa attack as it tried to find space up top. Then, Arsenal scored their third in the 62nd minute off a corner that the big man, Per Mertersacker, headed in leaving Given frozen as he watched helplessly as the ball crossed the goal line.

As if this lead wasn’t comfortable enough, in the last minute of stoppage time Arsenal added one more when Olivier Giroud tapped in a cheeky goal from an Alex Oxlade-Chamberlain cross that really rubbed salt in Aston Villa’s wounds. When it was all said and done Arsenal won by a score of 4-0 to win consecutive FA Cup titles, they last achieved this feat when they won the 2002 and 2003 championships.

This is also Arsenal’s 12th FA Cup Championship and they now hold the record for most FA Cup titles, surpassing rivals Manchester United, who have 11, and Tottenham Hotspur, who have eight.