Having never made the knockout round of a World Cup in its history, Greece faced the task of needing a victory and Colombia to win or tie against Japan. Check off knockout stage participants from the Greek list of World Cup accomplishments, as they disposed of Ivory Coast in another marvelous last-minute victory at this World Cup. It took a boneheaded defensive move by Ivory Coast’s Giovanni Sio on GGeorgios Samaras as he was about to shoot in box, but Samaras put the penalty in the back of the net in the final minute of stoppage time and the rest is history. Hard to beat that kind of result and that kind of history combined in one win.

Colombia didn’t let off the gas in a 4-1 win over Japan to close out Group C with full points. A lot of the credit for this win and Colombia’s full points needs to go to midfielder James Rodríguez, who has been a revelation in the tournament overall. On Tuesday, Rodríguez scored the final goal in the 4-1 victory, but he was just brilliant in attack all game long, adding two assists to the mix too. Oh, and did we mention he did it all in just the second half? Ya, Rodríguez was a halftime sub and it paid dividends for a team that was tied 1-1 with the Japanese at the half.

For the third time in his career Suarez was caught biting an opposing player, and this time it happened with the entire world watching. While locked up in a bit of a physical battle with Italian defender Giorgio Chiellini, Suarez did the dastardly deed of taking a bite out of Chiellini’s shoulder and proceeding to flop as he looked for Chiellini to react. There’s zero place for what Suarez has repeatedly done, and FIFA better ban him for the rest of the tournament. Simply put, Mr. (I use that term lightly) Suarez — you, you are a LOSER.

I guess any part of the body is up for eating.

On paper the Ivory Coast is a much better team than Greece, but all it took were two moments of opportune timing for the Greeks to go through and that’s all that matters. Considering the Greeks have never really lived up to the potential after surprising everyone to win Euro 2004, getting to the group stages with the aging roster from that tournament is a big surprise indeed.

Pure joy at the World Cup can’t be equaled in sporting glory if you ask me. Just watching the reaction of a nation doing something few thought possible is what this tournament is all about, especially in this wild and crazy year. 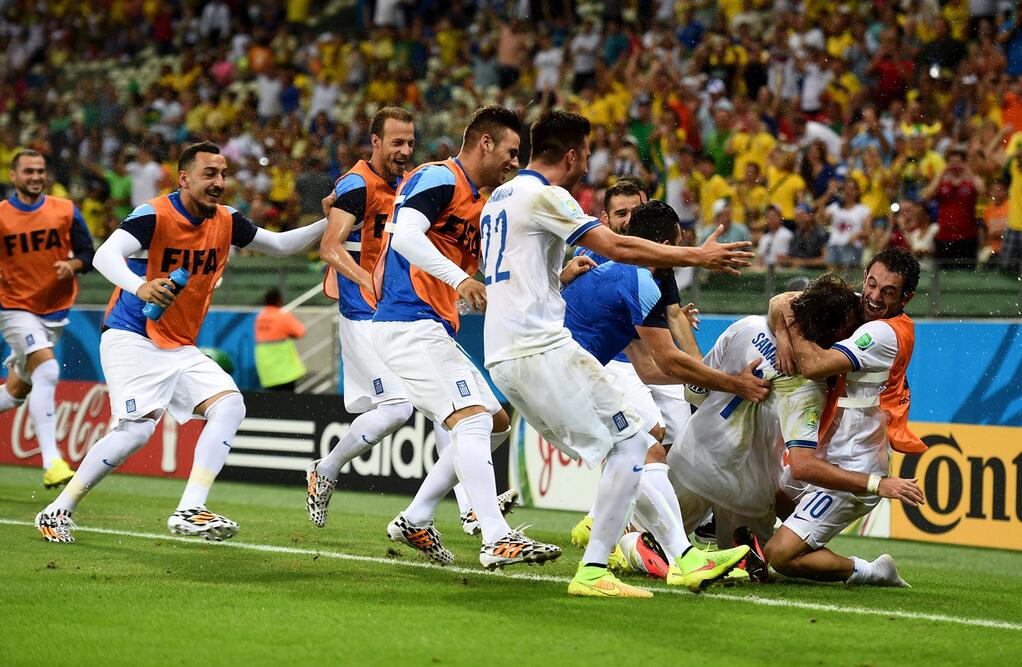 The substitute had already put his stamp on the game with two second-half assists, but he one-upped all of that with this individually brilliant display for the final goal for Colombia.

The drama that is Italian soccer played out in a big way on Tuesday following Italy’s loss to Uruguay and unceremonious exit from the 2014 World Cup. At the post-game press conference things went downhill quickly as head coach Cesare Prandelli came out and announced his resignation as manager of the Italian national team. Italian FA president Giancarlo Abete also resigned and then recommended the board not accept Prandelli’s resignation immediately after Prandelli’s statement.

However, the drama and strange moments were just starting:

We’ve had taxes, technical setup, 2 guys resigning & one trying to convince the other not to do so…Now youth & foreigners to blame too.

Prandelli: “We don’t have a sense of patriotism, people laugh at National Anthem.”

Leave it to the Italians to up the drama upon its exit from the tournament.

Argentina is through thanks to a dramatic goal by Lionel Messi in the final moments of Saturday’s contest with Iran. Nigeria have been dreadful itself, yet are in position to just need a tie from this game to move on in the World Cup. A tie will do Argentina just fine as well because that will ensure them the top spot in this group, while a loss would see Nigeria go top of Group F. Don’t expect the Super Eagles or La Albiceleste to put a ton in to this game with a draw needed for both to go through.

Incredibly a team that has scored exactly zero goals, Iran, is in position to potentially go through to the next round with a win. Sure, it will take them scoring a goal and holding a team that’s scored just one itself out of the back of the net, but it is doable. Oh, and it will take Argentina to win over Nigeria too. Goals are going to be at a premium in this one, as the two teams have combined to give up just four goals in four combined goals so far this tournament. What will be interesting to see is if Bosnia, who is already eliminated will pack it in or play with reckless abandon knowing its first World Cup is already over.

No one is technically eliminated from Group E play, including a Honduras team with no points to their name. The CONCACAF side will need a win over Switzerland by two goals and France to beat Ecuador by three goals to not leave it up to further tiebreakers. That’s a tall task for the side that has conceded five goals and scored just one itself. Switzerland advance with a win and either a draw or French win over Ecuador, and the Swiss have to be the favored side all things considered in this group. However, this World Cup has taught us to expect the unexpected, so let’s not 100 percent count out Honduras.

France is through, even in a loss as long as they don’t loose by seven goals to Ecuador, so let’s pencil Les Bleus in to the round of 16. That said, this team has played with a chip on its shoulders and after the embarrassment of the last World Cup, don’t expect this side to take it easy on Wednesday. Ecuador certainly won’t because a win puts them in the drivers seat to advance on goal differential, given its two goal lead over the Swiss and four goal lead over Honduras. However, the question for Ecuador is if they have enough in the midfield to keep up with what France has put together so far this tournament. It may be cliché, but the center of the pitch will tell the story of this game.