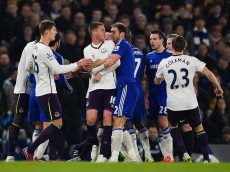 An interesting development emerged before the end of the Chelsea/Everton game. As Gareth Barry got his red card late in the game, there was a scuffle between Chelsea’s Branislav Ivanovic and James McCarthy. Ivanovic does get close to McCarthy and it appeared as if he was going to butt heads with McCarthy. Some are pointing […]