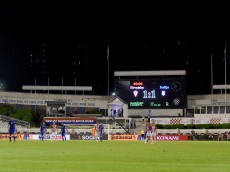 Croatia faced Italy in an empty stadium for their 2016 UEFA Euro Qualifier due to racist acts committed by Croatian fans. Now, they may be in even more trouble. While it is faint and tough to spot at first, it appeared that swastika was spotted in the pitch where Croatia and Italy played. Officials tried […]