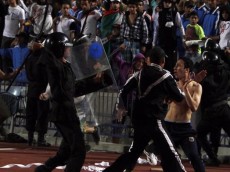 An Al Jazeera report claims that at least 40 have died due to a soccer riot in Egypt on Sunday featuring Zamelek fans and police. This took place about a month after club soccer returned to Egypt. Club soccer was banned by the Egyptian government after a riot broke out at Port Said Stadium in […]