The Euro Quarterfinals are almost upon us. After a group stage and round of 16 filled with twists and turns, viewers will be filled with questions. What should we be prepared for? Who should we keep an eye on? Will there be any shock results? Well, we got you covered with a pocket-sized preview of the upcoming quarterfinals. 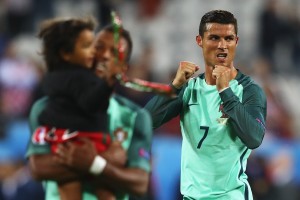 LENS, FRANCE – JUNE 25: Cristiano Ronaldo of Portugal celebrates his team’s 1-0 win after the UEFA EURO 2016 round of 16 match between Croatia and Portugal at Stade Bollaert-Delelis on June 25, 2016 in Lens, France. (Photo by Clive Mason/Getty Images)

The first matchup of the quarterfinal round is a strange one. Poland have done well enough to make it this far, but haven’t set the world alight. The same with Portugal, making it through on a match so boring that it made you question why you love soccer at all. This will come down to a single moment of magic and could go either way.

Cristiano Ronaldo – The player that will decide whether or not Portugal make it past Poland or not. If he performs as we know he can, they should win. 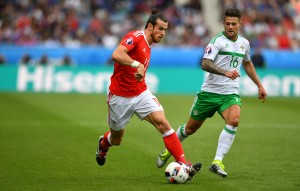 PARIS, FRANCE – JUNE 25: Wales player Gareth Bale in action during the Round of 16 UEFA Euro 2016 match between Wales and Northern Ireland at Parc des Princes on June 25, 2016 in Paris, France. (Photo by Stu Forster/Getty Images)

This is a match between a group of team of players supporting a superstar and a group of superstars in the same kits. Belgium should run away with this, but Wales have consistently punched above their weight this tournament. It will be close, but Belgium just have too much about them, registering the two top assisters in the tournament and one of the best defenses. 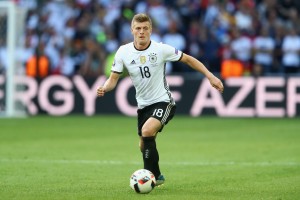 LILLE, FRANCE – JUNE 26: Toni Kroos of Germany runs with the ball during the UEFA EURO 2016 round of 16 match between Germany and Slovakia at Stade Pierre-Mauroy on June 26, 2016 in Lille, France. (Photo by Alexander Hassenstein/Getty Images)

Italy have been one of the surprise teams of the tournament, playing a tactically sound style that shuts down most of the teams the play against. Germany are one of the most well rounded teams in the tournament and were one of the pre-tournament favorites. This quarterfinal match should be a German win. Italy doesn’t score enough goals and Germany haven’t allowed a goal yet. This game will come down to one team breaking down the other, and the most likely of that is Germany.

Toni Kroos – Kroos has been instrumental in keeping the German midfield ticking this tournament. With him in form, he has the ability to take this game by the scruff of the neck, and against a team like Italy, that is essential. 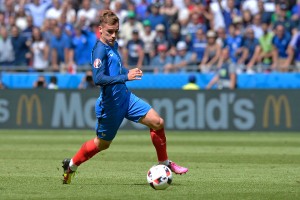 LYON, FRANCE – JUNE 26: Antoine Griezmann of France runs with the ball during the UEFA Euro 2016 round of 16 match between France and the Republic of Ireland at Stade des Lumieres on June 26, 2016 in Lyon, France. (Photo by Aurelien Meunier/Getty Images )

Iceland are the Cinderella story of this tournament, and the fact that they’ve made the quarterfinals is a testament to their youth soccer development strategy that they implemented. There is always one Cinderella story, and, unfortunately, it almost always ends in heartbreak. France is just such a strong squad and will be motivated to win in their home country and Iceland will need to beat France, a team who hasn’t lost in a major tournament in their home country since the 1938 World Cup. That being said, people said similar notions when they came up against England. Iceland will be hoping for some similar magic. Sadly, I just can’t look past France in this match.

Antoine Griezmann – He is already one of the top goalscorers of the tournament and will be the focal point of the French attack. Even with the other goal threats that France have, he is the one to watch in this team.