As it was reported by Grant Wahl last week, FIFA is officially proposing to have the 2022 FIFA World Cup in winter.

I honestly don’t know what FIFA means by “proposing” to put the World Cup in winter. It’s not like they need approval by someone else. Yeah, they have “support” by all six confederations but I’m sure their input was valued like everybody else with half a brain who had the foresight to realize that it’s FREAKING hot in Qatar in the summer. FIFA seems to have decided on just about everything else at this point, even with widespread disapproval by the vast majority, so what’s new? FIFA could say that the 2026 World Cup could be played on the North Pole and wouldn’t need to “propose” anything to make that happen. They own the tournament, they can just do it instead of masking it like it’s a choice. Come to think of it, the North Pole is probably a more appropriate place to have the World Cup. At least you can play a North Pole World Cup in the summer.

FIFA decided that a November/December World Cup was the only possibility after checking with all of the possibilities. In this FIFA graphic, it shows that due to the 2022 Winter Olympics, Ramadan and the heat, only March, October, November and December were available. There is also talk of shortening the World Cup schedule. 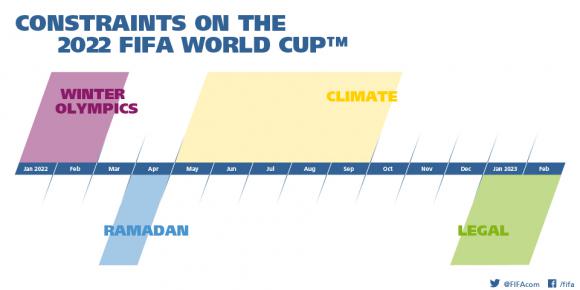 A November/December World Cup will cause almost every league in the world to alter their schedule in some fashion. Even leagues like MLS, who play over the summer, will have to move their season up by a couple months.

Qatar is like that person at a party nobody likes but they got invited because they paid the host to get an invite. Everyone else at the party now has to bend over backwards to accommodate this person who paid their way to the party and you are now not liking this person more and more. Now even though it was agreed by everyone to have the party at 8 PM and people planned accordingly, this person, who only got invited by paying their way in, can only make it at 3 AM. While this ruins everybody else’s plans, this person pays the host and a few other people at the party to be okay with moving the time of the party, even though everyone else gets screwed over. Yeah, it’s kind of like that when it comes to Qatar, FIFA and the 2022 World Cup.